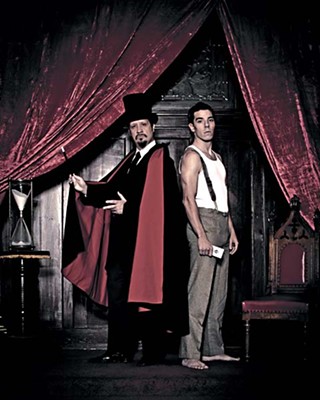 
The most important part of a magic trick is the finish. You can dazzle 'em with showmanship, but if the final reveal doesn't deliver, the trick falls flat. Beth Burns, director of Hidden Room Theatre's Invisible, Inc. – the world premiere of a new script by playwright Paul Menzer – seems very conscious of this fact. The play is an exercise in stakes-raising, teasing out its plot elements slowly and letting the story unfold at a deliberate pace. It balances the setup/punch line style repartee of a screwball comedy with onstage magic tricks and moments of real gravity as it unfolds its noir mystery. And when it comes time for the big reveal, it pays off the premise. Voila!

Invisible, Inc. is the name both of the play and the magician's troupe the play follows. Led by Sebastian Topflyte (Robert Matney), Invisible, Inc.'s team of tricksters – comprised of the behind-the-scenes Doc Isoceles (Todd Kassens) and Question Mark (Londoner Laurence Pears, returning to the Austin stage after a show-stealing appearance in Hidden Room's Rose Rage), and Topflyte's stage assistant, Ladyfingers (Liz Fisher) – are the hottest thing in Prohibition-era New York stage magic. That doesn't sit well with aspiring magician Cord McCade (Joseph Garlock), whose downtown, undershirt-and-blue-jeans approach to stagecraft offers a more visceral take on the illusory arts than Topflyte's tux, top hat, and tails. When a detective stops by the Invisible, Inc. office to inform Topflyte that his niece has disappeared at McCade's show, the conflict between the two stops being one-sided. The magicians square off against each other as Topflyte's team seeks the girl, and McCade attempts to turn Ladyfingers to his own side.

The play puts a significant load on the shoulders of Matney, who has to be by turns oafish and self-obsessed, capable of selling nuanced drama, and able to pull off actual stage magic for an up-close audience, but he's more than up to the challenge. With so much plot and trickery to get through, there isn't much time for character moments – and Matney gets the best of those – but Garlock deserves mention for the intensity he brings to McCade, balancing a palpable menace with a performer's charm, while Fisher's easy chemistry with her male co-stars makes her compelling.

Ultimately, though, Invisible, Inc. is more than just a well-acted performance of a tightly plotted mystery, and this is where Burns distinguishes herself: It's both a play about magic and a performance of magic. That goes beyond Matney and Garlock's tricks, which are impressive on their own: The entire production is built around little pieces of magic – from the music provided by the player piano (reproducing a performance by Graham Reynolds) to the actual, onstage gunshots – and culminates in a reveal that pays off the mystery the play has set up, just the way a good trick must. Voila.