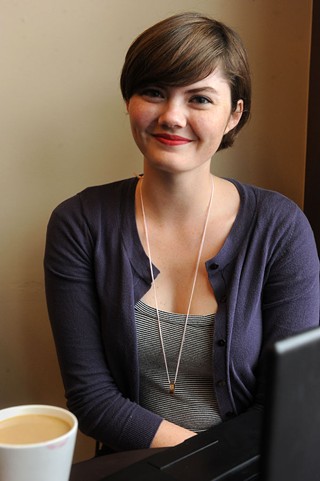 "I say 'vagina' all the time now," Hillary-Anne Crosby says with a disarming smile. "The whole point of the word is just, here's this sex organ that you have! Or maybe you're male and you wish you had one. But it's not this offensive thing. It's not meant to be."

As if to underscore this point, the founding editor-in-chief of Vagina : : The Zine gives off a decidedly nonthreatening vibe in person. Sporting a pixie cut and a crisp white button-down at our interview, Crosby is all dimples and uptalk and aspiring-journalist enthusiasm. But with her provocatively titled zine launching its seventh issue at Cheer Up Charlie's this Saturday, Crosby has proven she's got the huevos to put front and center women's creative work, from poetry to humor to essays on gender politics.

Crosby created Vagina : : The Zine in 2011 as a homegrown substitute for the journalism internships she couldn't afford while working her way through the University of Texas. "I'd never even seen a zine before," she confesses. The name, originally her own nickname for the ladies-only project, stuck. "I'd been thinking of it that way for so long that I was like, alright, we're going with it. Vagina. It'll stand out."

Stand out it does, despite Crosby's goal of normalizing the word. "I get a lot of jokes. People are like, 'I'm going to start The Gentlemanly Penis.' And I'm like, 'You should!' But no one's doing it. If I can start a zine, having never seen one ... Zines are the easiest."

Well, maybe not the easiest. As the only editor who still lives in Austin, Crosby prints, folds, and staples each and every issue at her kitchen table. "Sometimes my tears get on it," she laughs. "For a past issue, I used a sewing machine, and there were all these problems where, like, my blood would end up on the design. So it's really blood, sweat, and tears that go into it."

Crosby views Vagina as an alternative to mainstream women's magazines. "I'm not even trying to be all super-vagina-feminist about this, but I absolutely hate Cosmopolitan. I'll read it and I'll come away really disheartened, not sure how I feel about myself." Nevertheless, Crosby won't be publishing her thoughts on Cosmo in Vagina anytime soon because, in her words, "It would be kind of mean."

If this seems excessively polite, it's all part of Crosby's inclusive stance on feminism. "My definition of feminism is just respecting and supporting women. I label us a feminist magazine because I think that everything we're doing is respecting and supporting women and their different views. We have girls that write really openly about their sex lives, or their abortions, or their dreams of being a stay-at-home mom. That's what I love about it. Vagina is meant to be for that woman who likes who she is."