All it takes is a serious milestone like a 20th anniversary to make you want to get the old gang back together. That's how it goes with high school graduations, so why should performance festivals be different? FronteraFest, our annual jamboree of homegrown theatre, poetry, improvised comedy, puppetry, interpretive dance, and everything in between, hits the big 2-0 this January, and one way it's commemorating the occasion is by inviting some former Best of the Fest winners and longtime participants back to present a piece this year. Dubbed the Featured Alums, they offer just one more enticement to give your evenings over to FronteraFest once it begins Tuesday, Jan. 15.

One Featured Alum will appear each Thursday night of the Short Fringe – and after two decades, I expect you know the drill: Each night, Tuesdays through Fridays, 8pm, you get five different works of 25 minutes or less, and on Saturday the cream of that week's crop appears in the Best of Week program. Then, the fifth week is devoted to pieces judged Best of the Fest. Here's the schedule of Featured Alums:

Terri Mowrey in West Side Terri

Jan. 17: Cyndi Williams, playwright/performer – "Songs That Remind Me of My Sister (part two)." The author of the 2005 Long Fringe's Where Are They Now? performs one of the essays posted on her Facebook page.

Jan. 31: Emily Fordyce, producer – "I Put My Love Right Cheer So's I Wouldn't Fergit Where It Was, But Somebody Stole'd It," by Tooper Tater. The producer of "Whoom" (2009) serves "another bowl of Meander Cat Stew, another Christmas ruined by Ernest Borgnine, another foot chewed off to fit the slipper," performed by Peck Phillips. 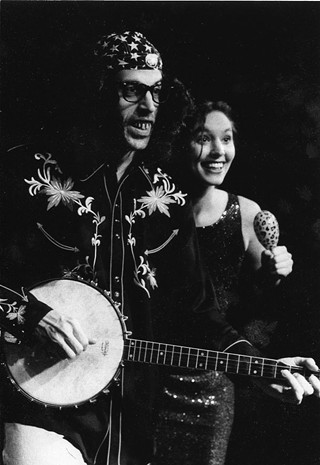 Feb, 7: Keira McDonald, playwright/performer – "My Arab Spring." The Seattle-based creator of "Astro-Naughty" (2010) and "CockTales" (2011) takes us to a Bedouin village on the Red Sea for true tales of love and adventure from an American girl who lives there.

Also of note in the Short Fringe are the ScriptWorks commissions, with one new work commissioned by the playwrights organization each Wednesday. This year's enlisted writers are Abe Koogler (Jan. 16), Jason Rainey (Jan. 23), Reina Hardy (Jan. 30), and Max Langert (Feb. 6). We're especially intrigued by Rainey's, set in a post-secession Texas being invaded by the Mexican army, with Rick Perry played by legendary local artist-comedian Kerry Awn.

The Long Fringe – shows running 90 minutes or less – follows Jan. 21-Feb. 3, at Salvage Vanguard Theater, 2803 Manor. With only one venue this year – bye-bye, Blue Theater – there are fewer offerings, but they're intriguing as ever. Among the 11 full-length shows are ICU, a new dark comedy about life, death, and marriage, by nationally known playwright Allison Gregory (who also happens to be married to Steven Dietz); Capital T Theatre's local premiere of Gruesome Playground Injuries by Rajiv Joseph, author of Bengal Tiger at the Baghdad Zoo, with direction by accomplished actor Kelsey Kling; West Side Terri, Orange Country theatre artist Terri Mowrey's solo performance of the film of West Side Story; and Turning Tricks With the Darlings, a magic show with 2012 Best of the Fest winners Jack Darling and Trish Sherrer.

The fest will celebrate the launch of its 20th year with an opening week afterparty on Saturday, Jan. 19, at Gallery Black Lagoon, right across from HPT, with edibles provided by Asti Trattoria, the Parlor, and Beverage World. For the full schedule and more information, call 479-PLAY or visit www.hydeparktheatre.org. 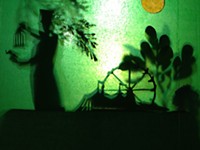