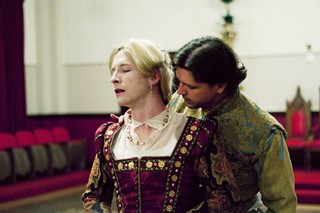 1) 'ROSE RAGE' (The Hidden Room Theatre) Shakespeare's left-for-dead histories of Henry VI charged to vital, absorbing life by director Beth Burns and the year's most vigorous, committed ensemble. Her Original Practices crew made arcane family feuds over the English crown as urgent as this season's high-stakes political battles and made four hours race by.

2) 'RAGTIME' (Zach Theatre) More than a showpiece for the new Topfer Theatre's bells and whistles, this deeply felt drama of humanity and history threaded together in a tapestry by turns tragic and inspirational said as much about us today as about Americans a century past.

4) 'NOW NOW OH NOW' (Rude Mechanicals) A mind-tickling foray into the natures of beauty, society, evolution, and chance, with attendees teamed in quests, teased with puzzles, toasted with cordials, and treated to a series of giddy surprises.

6) 'THE ALIENS' (Hyde Park Theatre) A detailed portrait of friendship, etched in silences more than words. Beautifully acted, with a fearless Jude Hickey scratching 130 layers under his character's skin just by repeating "ladder."

7) 'JUBILEE' (Rubber Repertory) Watching this show felt rather like spying on endurance tests at a theatre camp, but its odd exercises also tapped some essence of drama in presenting the thrillingly unexpected and unpredictable.

9) 'UNDER CONSTRUCTION' (Mary Moody Northen Theatre) Another exhilarating spin with director David Long and playwright Charles Mee, this time across the USA, circa midcentury, joyously celebrating and subverting those happy days and American values.

10) 'BOTTLED-IN-BOND: THE DECLINE AND FALL OF A THUG AS TOLD IN FIVE DRINKS' (Fusebox Festival) Patrons were drafted to act out a cornball melodrama of love among thieves, but who minded when served with such good humor, sweet theatricality, and intoxicating craft cocktails? As fun as audience participation gets. 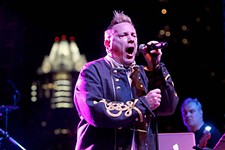