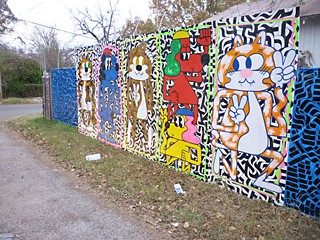 The kinds of felines that are branded "alley cats" tend to resemble the byways they roam: a bit wild, a bit scruffy, a bit bedraggled. You wouldn't confuse them with the pampered pets passing their days indoors any more than you'd mistake the narrow, weedy, dusty alleys parting rows of backyards for the broad, paved, curbed streets running past the homes' front doors. Both are typically uncultivated, meaning you're unlikely to associate either with art.

MASS is looking to change that – for 12 months, anyway. This creative collective of local visual artists, curators, and writers has undertaken the Alley Cat Project as a way to cultivate art in those oft-neglected passages in our city. With $4,000 from the Idea Fund, the Texas regranting program funded by the Andy Warhol Foundation for the Visual Arts, MASS commissioned 12 works to be placed in specific alleys between Lady Bird Lake and MLK in East Austin throughout 2013. MASS members Erin Curtis, Drew Liverman, Andy Rihn, and Xochi Solis are among the creators, but it's more than the collective's cats leaving surprises in these alleys; participants range from local printmaker Matt Rebholz to the high-school artists in AMOA-Arthouse's Club-A program to Brooklyn-based painter Yashua Klos. MASS has mapped all the artwork locations on its website and is posting images as each is installed.

So far, about a quarter of the sites have work up. Isaac Lin's cartoon cats and dogs wave greetings off Navasota between Holly and Haskell Streets; Xochi Solis' layered collage sits placidly between Chalmers and Chicon in the alley south of East Cesar Chavez; Mike Ricioppo and Drew Liverman's jazzy, vibrant triptych makes a party over some corrugated metal off Waller between East Second and East Third; and the Club-A's banners dangle words and messages – "Everyone Matters," "You Only Live Once," "Follow Your Dreams," "Red" – from trees in the alley running between Poquito and Chicon, north of Pennsylvania Avenue. These artworks are fun to hunt down, and even when you're looking for them, they manage to surprise – offering unexpected bursts of color and visual stimulation in mundane spots, amidst the overgrowth and detritus of urban neighborhoods. As with similar projects in recent years – the Pay Phone Revival Project, Cracks in the Pavement – the fact that these artworks don't belong in these locales adds to their charm. They transform the spaces and our perceptions of them. The remainder of the works will be installed over the next five weeks. Check www.massgallery.org regularly for the latest news on what's up where.

And while you're in the neighborhood, drop by MASS' new home in the cultural complex at 507 Calles. Since the collective lost its first home – the garage space adjacent to the Blue Theatre on Springdale – in 2010, it's been mounting exhibitions and events in assorted locations. But now MASS Gallery is back, with 1,500 square feet for showing art, screening films, and hosting events for the community, plus several large studios for making work. First up in the gallery, a pair of Scotts: Scott Eastwood with "They Never Die They Just Go to Sleep One Day" and Scott Gelber with "DOOM II." For more information, visit www.massgallery.org.