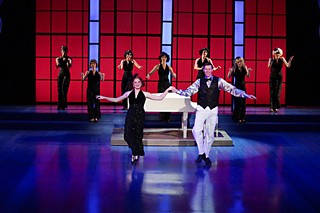 
Dream though we may, Austin probably won't ring in the holidays with any of that powdery stuff. But Irving Berlin's White Christmas the Musical, Zach Theatre's second production in the shiny new Topfer Theatre, will nonetheless help you on your way to a merry and bright Christmas.

The nostalgic 2004 stage adaptation follows closely in the steps of its namesake, that warm 'n' fuzzy 1954 film about the shenanigans that ensue when a pair of suave, singing-and-dancing WWII veterans and a pair of lovely singing-and-dancing sisters spend Christmas together at a Vermont inn. They mount a musical revue in a barn, grow the Army general turned innkeeper's Grinch-sized heart, and, by about 9:45pm, everyone falls in love.

If the Topfer's first spectacle, Ragtime, was challenging in terms of both its music and its vast ensemble, White Christmas is equally ambitious where choreography is concerned. The show requires more than a few extended dance breaks, and the film sets a high bar, especially for the character of younger sister Judy (played onscreen by fireball Vera-Ellen). It isn't often that Austin audiences are treated to excellent dancing in our musicals; fortunately, Zach's staging does not disappoint. Director Nick Demos' lively choreography is fun to watch as performed by the terrific Elizabeth Koepp as Judy; Matt Gibson as her love interest, Phil; and a broadly-grinning ensemble of what must be the finest (or best rehearsed) local musical theatre dancers.

As far as music goes, the cast does well showcasing some 16 Irving Berlin standards. In "White Christmas" and "Blue Skies," crooner Matthew Redden proves his mettle as a leading man, giving his Bob Wallace (the Bing Crosby character) more than enough charisma and charm to win the heart of Meredith McCall, who plays Judy's stubborn older sister, Betty. In this persona, Redden is almost indistinguishable from his last Zach role, Xanadu's bare-legged bro Sonny. McCall, once again sounding those impressive pipes in "Love, You Didn't Do Right by Me," earns her keep on Zach stages, though she is an odd fit for the role.

Endearing though the four leads are, the show's most memorable moments belong to Barbara A. Schoenhofer as inn concierge Martha "the Flop" Watson, a loud and proud former Broadway performer. She nails every note and kills every joke, to the chagrin of her stern boss, General Waverly (Harvey Guion, excellent as ever), and the delight of her young protege, Waverly's granddaughter Susan (precious Hannah Roberts, alternating with Caroline Hooten).

White Christmas is a sentimental stroll through a winter wonderland that occasionally follows the film like a loyal pup. It may not be fresh, but nothing says Christmas like snow and Irving Berlin, and Zach has plenty of both.