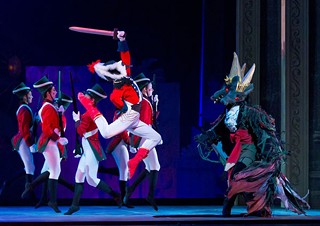 How to rid yourself of that Rat King problem: Ballet Austin's The Nutcracker (Courtesy of Tony Spielberg)


"Why do nutcrackers have beards?" asked my 4-year-old during Ballet Austin's matinee last weekend. I'd never given it a thought – they've always had beards. The Nutcracker, a vision lovingly adopted throughout the country from New York City Ballet's greatly missed George Balanchine, is about tradition. For 50 years, parents have taken their children to see Ballet Austin's version, packing performances with young eyes and ears. While my son saw a celebration in a magical land, I saw a long, satisfying tradition of dance: homages to original choreographers Marius Petipa and Lev Ivanov, steps echoing Balanchine's speed and density, and freshness in the light comedic touch of BA Artistic Director Stephen Mills. In a decidedly unstuffy production, playful humor and clear pantomime add humanity to both characters and orchestra. Mrs. Silberhaus giving her husband the "come hither" sign before retiring for the night, naughty Drosselmeyer (commandingly performed by Edward Carr) pinching the maid, and the orchestra raising bows and horns out of the pit's depths elicit well-deserved giggles and applause.

Mills offers us a Nutcracker where gorgeous dancers and animated children, all in sumptuous costumes, take us back again for the first time to the land of sweets. Academy students are woven into the work's fabric and often push the action along at a speedy clip. In a matter of minutes, the stiffly precise soldiers and clawing rats (looking like Dickensian ragamuffins) wrap up the battle, dispose of the Rat King's remains, and make way for the angels, who sweetly deflect attention from the Nutcracker's transformation. Creating packed action sequences that remain engaging and visually distinct while attending to fine detail is one of Mills' greatest choreographic strengths.

As the Snow Queen, Rebecca Johnson's breathtaking extensions and unfurling arms wring every last bit of expressive juice from the demanding role. She is confidently partnered by Christopher Swaim, and an extremely strong and buoyant corps of Snowflakes spin and leap through continuously changing groupings and nail closely spaced canons of movement.

While the company members in the act two divertissement all performed swift, breezy, densely-choreographed variations, I felt bad for them: All their craftsmanship and gorgeousness lost out to the candy hat, fake boobs, and campy air guitar solo of Mother Ginger (special guest Joseph M. Martin at this performance) in the 4-year-old vote for best performer. My guess is that happens every year. My test audience of one began to poop out during the Waltz of the Flowers, which is too bad because he missed Jaime Lynn Witts' playful and flirtatious Dewdrop weaving intricate patterns amongst the scarlet-clad flowers.

Having waited for my favorite part, the Sugar Plum pas de deux, I felt a twinge of disappointment. After so much warmth, flashing footwork, and luxurious counterpoint, it was hard not to be left cold by the courtly, reserved duet. Still, this old dancer's new family plans to make this annual production part of our holiday experience. Honoring tradition isn't about just passing down what we've always done, but using the past to help construct who we hope our children will become. 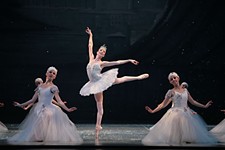