It's a Monday afternoon at Thunderbird Coffee, and Nigel O'Hearn is on the patio – there are no tables open inside. But even though it's the first cold day of December, he seems to have enough nervous energy to keep himself warm. In a little over four hours, his play The Attic Space will have its press preview, and despite a three-year run making theatre with his company, Palindrome, O'Hearn's never felt this tense about the opening of a show. "I don't know how this play is going to be received," he says. "I'm probably too close to it to understand, but it could be a catastrophe. Not only is theatre never surefire, but I feel more hanging-out-naked-in-the-wind than I have in a long time on a play."

O'Hearn has been the artistic director of Palindrome since its conception, but this is the first play that the company has produced that he's both written and directed. It'll also be the last. Part of the plan for Palindrome since its beginning was that it came with a self-destruct timer counting down from three years. After The Attic Space, it's set to go off.

That's an unusual choice for a young company, but O'Hearn is an unusual guy. A native Austinite and St. Edward's University graduate – he received degrees in English composition and general theatre studies in an attempt "to cobble together a playwriting degree between the departments" – the 25-year-old O'Hearn started Palindrome as a three-year project explicitly to produce classic and canonical work in a town known for providing ample opportunities for young playwrights to have their work produced.

When you talk about unusual choices for Austin theatremakers, O'Hearn's decision to devote a lot of time, energy, and resources to developing the reputation of a company that he's planning to pull the plug on in three years certainly stands out. A guy who strung together two degrees in order to educate himself as a playwright has used his company's not-insignificant resources (Palindrome's recent revival of All My Sons cost $25,000) to produce the work of Arthur Miller, Samuel Beckett, and Henrik Ibsen, waiting until its last show to put on a play that he wrote. These are definitely unusual choices, but O'Hearn has some unusual ideas about what he wants to do in theatre.

Palindrome Theatre was co-founded in 2010 by O'Hearn and director/actress Kate Eminger. From the outset, they conceived it as something that they'd do for three years, though the reason was fairly common among young Austin theatremakers: They were planning to move at some point to a city where the young and ambitious have a better chance of making a career in the field. "We were young, we had just graduated from school, and I think that it was a way of doing work, and doing work that could take you to another city," O'Hearn explains. "That's what [Kate] wanted: a foundation of work. Out of that grew: 'We're not going to do this forever.'"

Early on in the company's life, though, Eminger found that even a three-year commitment to making theatre in Austin wasn't in line with her ambitions, and she moved to New York. Austin Sheffield, another founding member, moved into the producing director role, and the company expanded. The three-year plan remained in effect, though its purpose changed.

"It became about trying to use that context of terminality to free up and explore work on more than just a production-by-production basis," O'Hearn says. "It felt just long enough to do a season like this for the final season. Three years felt like the right commitment time. If there was going to be terminality around it – [if it were] five years, you'd start to amass a certain infrastructure, and any less than three years would feel unfinished." O'Hearn, at this point, seems enamored of the options that the end of Palindrome provides him – while he has no definitive plans for what's next beyond staying in Austin for at least another year to help grow his family's pool-cleaning business, he likes the idea of focusing on his craft as a playwright and pursuing opportunities in New York or London – a dramatic change from producing and staging classic scripts in Austin for three years.

In its brief life, Palindrome has produced seven plays (eight, if you count the second staging of O'Hearn's adaptation of Ibsen's Hedda Gabler, which the company took to the Edinburgh Festival Fringe in 2011), and there's a commonality to all of its choices. The company has staged Samuel Beckett's Endgame, Sarah Ruhl's Melancholy Play, Edward Albee's At Home at the Zoo, Hedda Gabler, Dario Fo's Accidental Death of an Anarchist, Arthur Miller's All My Sons, and now O'Hearn's The Attic Space. With the exception of O'Hearn's original, all are works that you might find on a high school drama teacher's shelf. Most young artists with O'Hearn's sensibilities – that is to say, those who drop phrases like "context of terminality" easily into a conversation – tend to want to set the world on fire, but for O'Hearn, setting the world on fire involved trying to find ways to bring out the urgency he felt when he read these established plays.

"When we started in 2010, I don't think we were the only company doing more canonical work, but you tended to find it at venues like Austin Playhouse," he explains. "I don't think they do bad work, but I think there's a real separation between the progressive Austin theatre that's celebrated on somewhat of a national level, and what feels more like a community theatre. We were trying to bring some of the tenets of that traditional theatre and bridge it with this progressive excitement."

Palindrome certainly sought to do that in its time producing that work. In addition to adapting Hedda Gabler, O'Hearn wrote a new ending for Accidental Death of an Anarchist in an attempt to tie the play's themes to the Austin Police Department's Justification of Force policy, and with All My Sons, focused on making Miller's points about the Military Industrial Complex resonate with contemporary audiences.

Getting those themes across in the theatre is the reason that O'Hearn says he was determined to put on that work rather than his own. "I don't think my work is as good as Arthur Miller's work," he says with a self-aware laugh. "It would have been harder to make a case for theatre as social urgency, because I don't think I'm at a place where I'm writing work that has a stronger social message yet. A play like All My Sons, and especially a play like Hedda Gabler – those are the foundational documents of the theatre that invigorates this town. I think it would be hard to take my work and tie it to Palindrome's mission of taking classic work and showing it to have a social urgency."

Now, though, Palindrome's run is nearly finished, and it's time for O'Hearn to show what he's got as a playwright himself. So how did the six productions from the canon inform The Attic Space?

"I don't think I could or should be writing a play like All My Sons," O'Hearn says. "That is not what it's taught me. Having a sense that those works can be done in an invigorated way is not the same as what I want to write as a writer. But I've learned that what I really want to do is provide people with just enough of what they're familiar with. Accessibility for the majority of the play is greater than confusion for the entirety for the sake of being explosive. An explosion is better used a couple of times."

O'Hearn doesn't claim that The Attic Space is as effective as other plays his company has produced or even that it manages to bring that social urgency – he's big on "We'll see if it works" and "I don't know" when he talks about it in those terms. But he's confident that, whether he succeeds or fails with the play, theatre is the medium that's uniquely situated to do what he's interested in – which is trying to bring a room full of people together as a community to reflect the world in which they live.

"If you were to describe theatre to an alien from another planet," O'Hearn starts, by way of explaining why it was important to him to ensure that Palindrome's mission included a component about social relevance, "I think: 'A group of people agree to sit in a room while some other people pretend for a really long time – to the point where they're believing it – and neither party feels like it's about them. Each party feels like it's about the pretend story.' When it's at its best, something is manifested outside of the human mind. That sort of thing usually only happens in dreams." 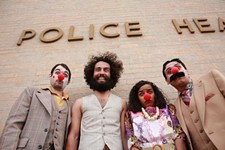 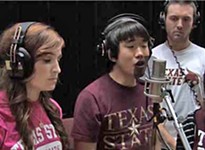