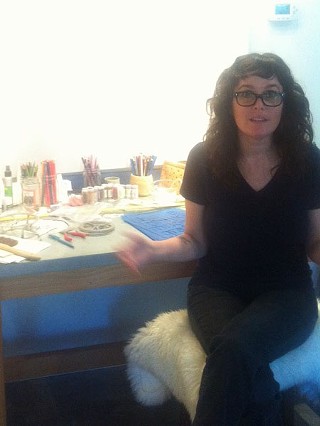 Ewalt, in front of her work table, explains her drawing process. (Photo by Andy Campbell)

Autumn Ewalt's primary studio space, located near Oltorf and South Lamar, is also her living space. In that respect, Ewalt is like so many artists in this city who combine life and work out of financial and practical necessity. When Ewalt moved to Austin four years ago, she thought her stay was to be only temporary. With her fiancé and collaborative partner, Dharmesh Patel, she has built a collaborative practice that goes under the moniker Animalis. Currently, they are developing a multifaceted project for the Colorado Street area. For this and other projects, they share a second studio only blocks away, a small barnlike space used primarily for fabrication. Ewalt and Patel's live/work area is open and friendly, with bric-a-brac and personal pieces scattered about. Harry Potter books share shelf space with artist monographs. It's in this space that Ewalt spends tedious hours building out her "word" drawings.

Austin Chronicle: One of my favorite parts of the East Austin Studio Tour was encountering an installation of about a dozen of your word drawings at Fisterra Studios. Can you tell me about these drawings and their genesis?

Autumn Ewalt: Originally, I started making numbers while I was at school at Cranbrook [in Michigan]. My work at that point had been concerned with athletics and competition. I played tennis growing up, and I also played the violin. That competitive structure, in many ways, ruined the things I really enjoyed doing. I had a lot of old jerseys, and I would cut the numbers out and put them on ceramic pieces. One day I didn't know what to do, and I just kept drawing the number zero – over and over. At some point, I started to do the same thing with language. When I moved here four years ago, I just became happier. The number and word drawings for me are positive, meditative. There were also practical concerns, too; when I first moved here, I lived in a tiny place, so the work had to be small.

AC: So when did you move into this particular space?

AE: I've been here two years, and when I initially moved in, I thought of it as a live/work studio space. This is actually my dad's property – although I should say I still pay rent! At the time, he was fed up with tenants who would just throw these huge parties and wreck the place. So now this place has become the opposite of that. You're one of the only people – strangers – to be let into this place [laughs].

AC: I'm honored! It's a really open floor plan, and you can see everything ...

AE: Yes, you can breathe. And the light!

AC: Your fiancé makes work, too, so do you use each other's spaces? Or are they pretty separate? I know that you work together on some projects.

AE: Well, we have a second studio a few blocks away, which is primarily used for welding. Dharmesh found it when he first moved to Austin, and it's a great little spot. But we do a lot of things, create and assemble works, here at the house. He's trained as an architect, so he does a lot of the rendering and engineering. I have no desire to weld. A lot of our working relationship is based on trust and respect for the other person's capacity to do certain things. I have a skill set that is mine, and he has his own. Depending on what project we're doing, we'll draw on each other's resources. We were friends and a support system for such a long time before we dated that this working relationship seems to come naturally. We have debates and discussions, like any collaborators, but ultimately we want to be the best versions of ourselves.

AC: So ... [pointing to a row of horse figurines] who likes the horses?

AE: Oh! That's me! I appreciate "cute" stuff. You can see animals and ceramic cats everywhere. My background is in ceramics, and it's a very unforgiving medium. Ultimately, I'm interested in intimate objects – I enjoy the detail and repetition of an intimate process. And for that, this space we've created works really well.