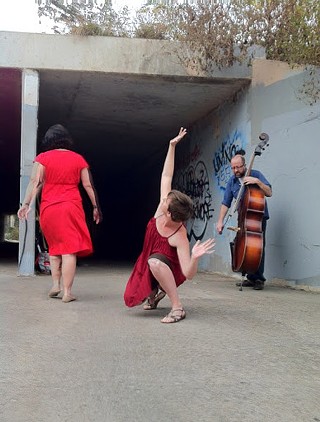 "Something You Can't Deny," by Katherine Hodges (Courtesy of Brigette Hutchison)


1) The dancers of Ready|Set|Go! took over a section of the Johnson Creek Hike & Bike Trail under MoPac this past weekend and turned it into an hourlong exhibition of dance and music in tunnels and on a bridge and up and down the ragged rocks of a dry creek bed. They called this Bridge/Tunnel.

3) The young dude walking along Lake Austin Boulevard, heading toward his afternoon shift at the Magnolia Cafe, may have been high; but he was several yards above the Bridge/Tunnel action, anyway, and we can only imagine what he (and the other innocent passersby on feet and on bikes) might have thought while glancing at the events playing out below.

4) The rest of us, purposely gathered to witness this spectacle of motion and sound, were legion – and smoothly herded from place to place within the site by a quartet of attentive guides. Smoothly indeed, even though the performers hadn't expected such a crowd. "The turnout was amazing to the point of happily overwhelming," maestro of the upright bass Tom Benton said after the show. "'Better bring the fuckin' art,' Rosalyn and I decided," he joked.

5) That's Rosalyn Nasky, he means – one of the featured dancers, along with Nicole Roerick, Katherine Hodges, Kelly Hasandras, Errin Delperdang, Alyson Dolan, Amy Myers, Scott Roskilly, Stephanie Chavez, Jude Hickey, Janna Rock, Joey Hood, Amy Benenate, Alex Miller, Zenobia Taylor, and Dany Casey. These kinetic specialists were accompanied by live music from Benton, and from Henna Chou, Adam Sultan, Drew Silverman, Max Stoffregen, and Jeffery Hooten. That's quite a laundry-list-looking run of names, and we'd be hard pressed to point out our favorite shirts and skirts among them – especially as there were several.

6) A person goes off, spreewise, with a metaphor like the one at the end of the paragraph above; it's a typical literary trope, maybe even a cliched one. What all the really cool writers do are things that are more experimental, and "experimental" is the word Ready|Set|Go! uses to describe what was performed during Bridge/Tunnel. But, I don't know. Is it experimental to figure out the most evocative way to express the collision of emotion and environment that manifests as site-specific work? Is it experimental to use other than the same-old same-old, no matter how beautiful that same-old same-old might be, to define the space that moving bodies can most expressively occupy? Science uses experiments to prove its theories, and maybe "experimental" dancers and musicians are trying to prove their theory that an audience will appreciate these new and unusual things they're doing in the name of This Is Part Of What It's Like To Be Alive Right Now. If so, then the troupe's theory proved successful. Besides being treated to a visual feast, we non-dancers with our untrained bodies got to live vicariously through the performers, could imagine our own lead feet, our own pinchbeck hands, turned to gold at the ends of more athletic and precisely controlled limbs. Experimental? It was an almost alchemical show.