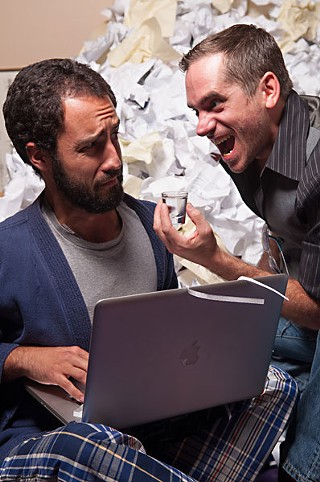 Who can write without a little shot? Noel Gaulin's Hero tempted by Joey Hood's Vodka

Far be it from me to discourage someone from actually going to the theatre in order to see something on a small screen, but here's an exception I think is worth making, because: 1) it's still fairly rare to see an Austin stage production captured on video; and 2) this one's going out to a global audience.

This Saturday, Dec. 8, Breaking String Theater breaks out of theatre's traditional confines with a livestreamed performance of its current production, Vodka, Fucking, and Television. A video feed from Hyde Park Theatre – edited on the fly by actor/playwright/director/designer/master video manipulator Lowell Bartholomee – will be available to anyone on the planet through the open-access, shared-resource channel #NewPlayTV, operated by the online theatre journal, HowlRound.

Conventional wisdom has long held that stage performances on film can never capture the liveness of the theatrical experience and invariably wind up flat. But recent success with live cinema broadcasts by the Metropolitan Opera, National Theatre of Great Britain, and Globe Theatre may be retiring that notion for contemporary audiences, and the web generation's willingness to watch anything on a small screen is opening a window for work by small, independent performing arts companies to reach around the world and find fans far from their homes.

A global audience seems especially fitting for this Breaking String production given its international nature. This contemporary comedy from Russia received a staged reading at Breaking String's New Russian Drama Festival last January, with its author, Maksym Kurochkin, in attendance, and the positive reception to the reading created momentum for a full production. It's exciting to think that Russians could tune in to see what a handful of Texans are doing with one of their sharpest dramatists today (that is, if they're willing to be up at 6am, Moscow time, to catch it live).

To see the live stream, log on at www.livestream.com/#newplaytv or www.breakingstring.com at 8pm, Central time. And by all means, feel free to see the play performed live as well. (For a review, see Exhibitionism, p.38.)