Breaking String's production is fun, but the script gets self-indulgent a little too often 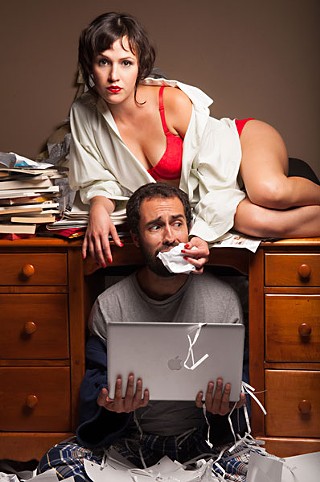 You know WTF: Think the Hero (Noel Gaulin) will be able to say no to Fucking (Adriene Mishler)? (Courtesy of Will Hollis Snider)


For some surely unknowable reason, the tortured inner lives of writers is a topic that writers – be they novelists, playwrights, screenwriters, etc. – seem to find endlessly fascinating. Weird coincidence, right? Self-loathing, vices, and their impact on men with a passion for creation are much-beloved topics in written works, and Breaking String Theater's new play is a full-on exploration of author Maksym Kurochkin's psyche.

Few actors on the Austin stage are more appropriate to take on a role like the Hero of Vodka, Fucking, and Television than Noel Gaulin, who has emerged as one of Austin's premier avatars of twitchy, righteous rage. He's convinced that he must give up one of the three titular vices, and personifications of all three quickly appear in his studio apartment, where each makes the case for its continued relevance to his life. The dapper, restrained Vodka (Joey Hood) and the smarmy, overdressed Television (Jude Hickey) defend themselves against the indomitable power of the barely-dressed Fucking (Adriene Mishler).

What follows is a power struggle of shifting alliances, a courtroom drama-style series of persuasive arguments, with the Hero listening to and rebutting each in turn. It's a funny, fast-paced hour of performance, aided strongly by the chemistry of the show's likeable cast and Liz Fisher's strong directorial choices, like the television in the apartment playing a string of thematically-appropriate clips that enhance the point being made at a given time. (Astute audience members will catch scenes from The Shining, Jerry Maguire, and the Twilight Zone episode "Time Enough at Last" at relevant moments.)

But those relevant moments are also at least as alienating as they are accessible. That's the danger of a play so specifically about its author's own neuroses: There's a fine line between "universal in its specificity" and "self-indulgent," and Vodka, Fucking, and Television is too often the latter. Trying to balance a creative life with alcohol, sex, and distractions like TV is a relatable theme; bemoaning the lack of vodka-selling kiosks in new capitalist Russia, expressing a love of specific Disney cartoons developed after a stint in the army, and working whatever marital issues Kurochkin has with the phrase "Fucking is my wife" are less so. (The "Fucking is my wife" sequence drags so long that even Hickey's Television has a line acknowledging how repetitive it is.)

However, at its best, the script creates a lot of opportunity for the talented cast to do good things. Gaulin turns himself into a cartoon wolf over Mishler, who plays up the ridiculousness of oozing sexuality onstage in this context. Hickey restrains his natural charms as a performer to interesting effect, and there's a physicality from all of the performers that's thrilling in a space as tiny as Hyde Park Theatre. It makes for a fun night, but one that only really seems to connect on the more shallow levels.