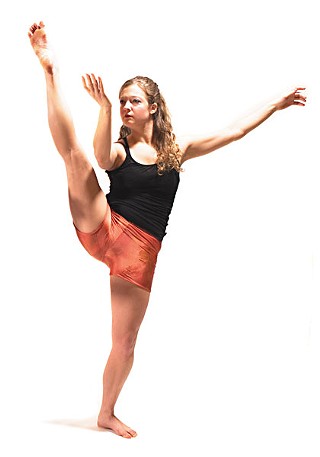 
I have to bicker with the title of Ballet East's latest program. While the company has historically been an in-between place for dancers and choreographers, there's nothing purgatorial or stagnant about it. Rather, it's a place where artists try out new ideas, build confidence, and develop quickly. People don't get stuck there. Sometimes, they move on before you're ready to see them go.

Over three decades of performances at the Dougherty Arts Center, company director Rodolfo Mendez has presented dances by many choreographers – including Sharon Marroquín, Andrea Ariel, and Gina Patterson – who have gone on to successfully produce their own work and have been tapped for projects on national and international levels. For others, like Dixon Mena, who has recently returned to Austin after several years in New York to be the company's resident choreographer, the journey eventually led them back to Ballet East. And then there's associate director Melissa Villarreal, for whom the journey became the destination: Mendez has been her mentor since she began attending his free classes in East Austin at age 14.

Reverence for the journey was a theme shared among the seven dances. Villarreal's "Transcendental Conversion," to music by Dead Can Dance, opened the program with an explosion of diversity – not just ethnic diversity but also individuality in expression and inflection. In a section peppered with African-inspired movement, Sadé M. Jones was powerful, dynamic, and luscious. In "Persephone," a haunting solo choreographed by dancer Hailley Schwartz and Eric Midgley, Schwartz showed not only gorgeous lines and expansive extensions but also nuance and maturity. A simple twisting gesture, reaching one arm behind her back, seemed to take up the entire stage. Mena's "Circulo Vicioso" transcended the dance-with-chairs cliche by way of manhandling: After peering out at the audience, the dancers slammed, kicked, and nearly threw the metal folding chairs, delightfully furious.

After intermission, five women in brightly colored tunics danced Schwartz's "Bury Me to the Sky," a reflective piece based on Native American themes. The concept behind Mena's trio "Female," however, was as vague as its title. A guest performance by five teenage members of the new Ballet East II – something of a bridge between Mendez's outreach programs and the performing company – was basic, but sweet and exuberant.

In "Credo," J.P. Flores' choreography was as dramatic and in-your-face as ever in depictions of faith and temptation. It's too bad for us that Schwartz and Flores, both new to the company's roster just a few seasons ago, now parse their loyalties between Austin and New York. Yet dancers like Jones and Leslie Castillo, whose delicate arms and stoic, fiery energy rendered lovely complexities throughout the program – and the relative novelty of having three men onstage (including the BE II dancers) – assure that significant journeys are still to be witnessed through Ballet East's programs.