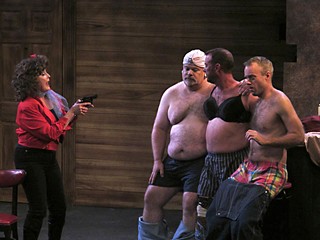 The boys finally get their comeuppance in Sordid Lives. (Photo courtesy of Matthew Irwin)


In Sordid Lives, Wardell is a minor character. In this review, he's everyone who ever found courage in truth, or salvation in acceptance. Barring that, he's anyone who ever laughed at himself.

Sordid Lives is the 1996 comedy by Del Shores that stirred up controversy in Wimberley a few months ago, when Wimberley Players members attempted to have the show canceled on the grounds of obscenity. It does talk dirty and feature gay characters, but then no one cares to be confronted by his or her own prejudices and fears. Not even the characters in the play.

The play opens on a West Texas family preparing for the matriarch's funeral. Shame, rather than grief, is the sentiment du jour as the characters learn the details of Peggy's death. Only her married lover, GW (Chad Martin), grieves vividly for Peggy, blaming himself for her death after she tripped over his wooden legs during a hotel room rendezvous. Meanwhile, Peggy's family focuses on avoiding the trove of sordid events of her life, such as locking up her son, Brother Boy (Kristopher Alvarado), in an institution for being a gay transvestite.

Peggy's oldest daughter, Latrelle (Nina Bryant), tries to preserve her mother's reputation as a good Christian, while avoiding indications that her own son, Tyler (David McCullars), is also gay. As the play's narrator, Ty explains why he hasn't come out yet, and why he must when he returns to Texas, from Los Angeles, for his grandmother's funeral.

But this review is for Wardell. Wardell (Will Mercer) is an overweight, short-tempered, and brutal bartender, who also wants to come out of the closet. No, he's not gay, just a victim of Southern Baptist mores and an antagonizer of outcasts. He conceals his platonic love for Brother Boy, his gay best friend, by beating him up, and he's weighted with guilt, until 20 years later when LaVonda (Leigh Shelton), Brother Boy's sister, finally comes for revenge.

Wardell's not the only character to face his fears by the final act, but he is the one to elevate the play's sentiment from one of mere tolerance for alternative lifestyles. When LaVonda and GW's wife, Noleta (Ellen Massey), force Wardell and GW to dress like women, Wardell tells GW to accept the punishment, because that's what a real man does – yes, even when he's dressed like a woman. Wardell then performs an act of love as courageous as that of any person who attends Sordid Lives at the Wimberley Playhouse. He acknowledges Brother Boy, despite what others might think of him.

Forget, by the way, that the play is actually pretty innocuous for anyone with a sense of humor. 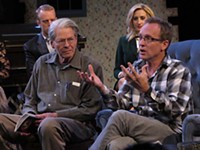