The disappearance, and tentative return, of a choreographic presence 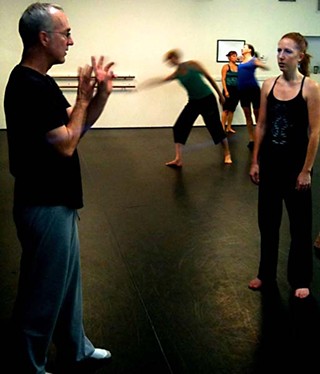 José Luis Bustamante is the first to acknowledge that his choreographic work has all but disappeared from Austin stages. For more than a decade, his dances were produced here regularly and met with local acclaim and international invitations. But when the company he co-directed with Yacov Sharir ceased operations in 2007, Bustamante, as so many other dance artists do when they acquire an appreciation for stability and fringe benefits, beelined for an MFA program, hoping the credential would lead to relative security in the ranks of higher education. For Bustamante, the move was a professional success: Now 51, he chairs the dance department at Austin Community College.

But between administration and teaching at ACC, Bustamante says, he doesn't have much time to nurture the kinds of work that might interest him. Since he doesn't feel defined, as an artist, by dance, over the last few years most of his few creative episodes have taken place in the realm of visual art. Making dance takes time and sustained focus from not just the choreographer but from dancers, which translates into investments perhaps not required for the painter or even the playwright, who can write a script without having to manipulate live bodies in the process. "I am also not a fast choreographer, in the sense of I don't want to just produce work," Bustamante says. "I did that for a number of years, and I felt that the actual quality of my work diminished toward the end, because it was very much about putting stuff out." So when choreographer and ACC faculty member Kathy Dunn Hamrick asked him to set a work for her company's Bountiful program, which it presents this weekend, Bustamante considered his calendar, the rehearsal schedule, and a roster that included several unfamiliar dancers. Wanting to say yes but hesitant, he proposed that he restage Unending Rose, a dance he's staged several times, rather than develop a new piece.

Despite the less arduous process of restaging a work, a rehearsal for the piece seemed an illustration of time limits. Two weeks before the performances, the dancers were working on the "Prelude" section, which they learned from a video. The section, set to quiet, pulsing piano and wavering cello, involves subtle arm gestures and cerebral geometry complicated by a waist-high elastic cord running across the diagonal of the space. Dancers align and square off, and then rotate to expose a different set of facets in space. After much deliberation, Bustamante asked, "Are there any questions?" Dancer Roxanne Gage (another of Bustamante's colleagues at ACC) laughed. "Uh, yeah." But on this day, there was no time for further clarification of this section; they moved on.

For the choreographer, the decision to produce a work begins the degradation of perfection. It's rare that a dance performance lives up to what exists in the artist's mind, so one can only hope that enough of the vision will come through to make it worth the sacrifice of the rest. In rehearsal, Bustamante focused on elements that might tip the balance: the subtle way a dancer responds to the resistance of the diagonal cord, the snapping together of a crystalline shape from a formation previously undefined, the reaching quality of the floral gesture as it culminates in a bud reaching toward the sky. But as the Borges poem reminds us, "Each thing/is infinite things," and a work of art is not, ultimately, a thing to break into more or less successful parts. The artist's personal successes and limitations aside, audience members are moved by the experience of the whole. 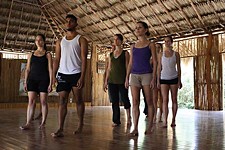