All Over Creation: The Persistence of Penguins

'And Then Came Tango' stirs up a fuss, but its birds fly after all 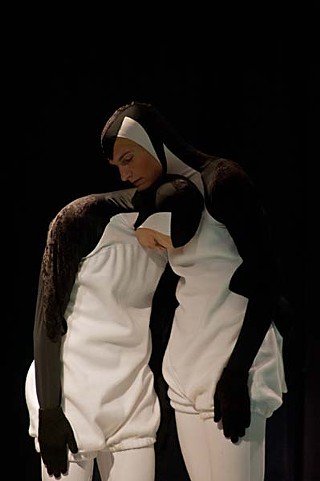 The ties that bind, even when you have wings: from the 2011 production of And Then Came Tango

What do penguins and cross-dressing country boys have in common?

Well, for the past few months, theatre and making a number of Central Texans uncomfortable.

In the Nov. 16 Chronicle, Arts writer Matthew Irwin recounted the rumpus in Wimberley over a community theatre's decision to stage Del Shores' Sordid Lives, a rowdy Texas comedy that includes among its dramatis personae a couple of gay men, one of them a transvestite. Some residents found the play offensive, thought it incompatible with community values, and contended that producing it would stain the Wimberley Players' reputation (though it's unclear how many critics of the play had actually read or seen it before voicing their objections), and so lobbied to get the show canceled. The theatre group stood fast, however, and this weekend concludes the show's four-week run. (For Irwin's review, see Exhibitionism.)

Curiously, while that drama of theatrical unease was playing out in our neighbor to the southwest, the curtain was rising on another one in Austin. As reported in media outlets ranging from The Daily Texan to Time.com, a University of Texas Department of Theatre & Dance production for children had its tour of 10 Austin Independent School District elementary schools scotched after the first performance ignited concerns that the material was inappropriate for second graders. The sight of two male penguins rearing a hatchling of their own – that's And Then Came Tango in a nutshell (or eggshell) – reportedly raised red flags for Lee Elementary Principal Elyse Smith, thus prompting AISD officials to suspend the tour for further review. Instead of taking Tango to Highland Park Elementary, the student cast gave a command performance for the district's fine arts director, Gregory Goodman, and the next week gave another for school principals. The upshot of it all was that the same-sex parenting of the play's two adult Antarctic waterfowl – though rooted in the real-world history of Roy and Silo, two chinstrap penguins who formed a pair bond and hatched an egg at the Central Park Zoo – skirted the edge of human behavior too closely for the comfort of AISD administrators, who saw it as a gateway to questions about human sexuality – particularly homosexuality – that it preferred not to hear coming from 7-year-olds. Not surprising, but note that in Goodman's widely quoted rationale for the district backing away from Tango – "The subject matter communicated in the play is a topic that Austin ISD believes should be examined by parents/guardians who will discuss with their elementary school age children at a time deemed appropriate by the parents/guardians" – the love that dare not speak its name is not named.

Now, And Then Came Tango doesn't mention homosexuality by name, either. And why should it? That isn't what graduate student playwright Emily Freeman wanted to talk about, any more than Justin Richardson and Peter Parnell wanted to talk about it in their 2005 picture book And Tango Makes Three. As the play's defenders have noted in The Daily Texan, Austin American-Statesman, and The Huffington Post, this story is about two individuals devoted to each other caring for a child. It's a sweet tale of an unconventional family facing challenges and overcoming them through love. Having seen it myself when it was presented in the 2011 Cohen New Works Festival, I can testify that it's a charming and tender piece that's very sensitive to the sensibilities of its target audience.

Freeman thought she'd made that point to Goodman and the principals whose schools were on the tour back in the spring, when she gave them a synopsis of Tango. And once concerns were raised this fall, she sought to accommodate them by making minor changes to the script and creating a permission slip for parents to sign before their kids could see the play. But despite her efforts and some support for Tango within the district, the tour was scuttled. Fortunately for Freeman and the other students involved in the production (for whom this was also course work), UT found schools outside AISD interested in the show, and in recent weeks it's been seen by students in grades higher and lower than second from All Austin Cooperative Nursery School, Austin Discovery School, Austin Jewish Academy, Del Valle Middle School, Primavera Montessori School, St. Francis School, and Round Rock High School. And the response has been overwhelmingly positive.

But the tale of Tango is not quite over. This weekend, the Department of Theatre & Dance will offer five free public performances of And Then Came Tango, providing an opportunity for those AISD students who won't get to see the play at their schools to see it, but also allowing families of all kinds – inside and outside the district – to see it together. And that will make for the happiest ending to this story.

On the one hand, having two plays in our area generate the same kind of knee-jerk homophobic response at the same time is disheartening. Have we not come any further than that by now? But on the other, it's shown how much courage and compassion exists among our theatre artists and their audiences. In adversity, we've persisted, and our best selves have been revealed – just like a certain family of penguins I know.