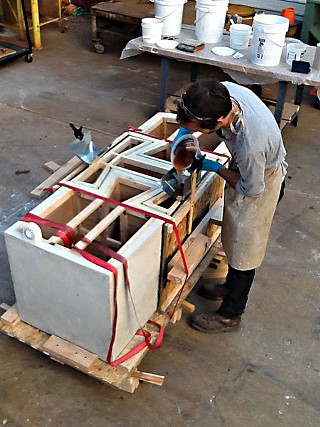 The first weekend of this year's East Austin Studio Tour, I served as a judge in the annual live-action reality-show art competition Eyes Got It!, masterminded by local curator/art critic Jaime Salvador Castillo. The idea of the contest is to make the process of juried art selection transparent, so that any artist who submits work can get good, honest feedback. As scary as that sounds, it's really a lovefest in the end. And one of the nice aspects of Eyes Got It! is that the previous year's winner – that would be photographer Hollie Brown in this case – gets to choose a favorite artist to receive an instant exhibition at Big Medium for the duration of EAST. This year, that lucky artist was Pittsburgh-raised Aaron Meyers. I was glad about Brown's pick because there's a lot to admire about Meyers' work; it is at once sculptural and performative, wryly funny and technically precise. His human-sized sculpture Dovetail (2012), made of three large interlocking mortar and rubber pieces, made the judging panel swoon, including me. I was curious to see where Meyers made such work. As it turns out, he is a current MFA student in the University of Texas Department of Art and Art History, and therefore works at myriad locations: a metals shop, a wood shop, and a sizeable personal studio.

Austin Chronicle: This personal studio space is a good space! Are you able to do the work you need to do?

Aaron Meyers: Yeah, I lucked out. The only problem is that much of my work, out of necessity, needs to be done in the bigger public spaces and shops. I get interrupted out there a lot.

AC: Are you easily interrupted?

AM: I'm pretty focused ... but I've started being less helpful to people. The first few weeks I was here, I would try to be as helpful as possible and give people long explanations, but at some point I realized I can't do that all the time. I heard a physicist talk at Columbia, and someone asked him why so many physicists do their best work while they're young. He responded with his own story, saying when he was young and working on his Ph.D., that he would get up and focus on physics 12 hours a day. He was totally consumed with it. Then he went on to say that now that he has a wife, children, and a teaching position, he can't spend that kind of time working on physics. So for me, that uninterrupted focus is really important.

AC: Is finish important to you? Take concrete, for example; it can be silky smooth or rough-and-tumble.

AM: Yes, materials are really important, and that makes finish important. I want something like the concrete I use to be cared for, without fetishizing it. I'm in that weird middle place; I'm not a guy in a garage, but I'm also not a fabricator either. Most of the time when I start something, I'm not sure how I'm going to resolve it, and that keeps things exciting for me. This concrete arch I've been working on is an interesting structure, but it doesn't have a poetics yet.

AM: Well, the artists I envy the most are the ones that seem like they're having fun, and they don't get stuck in some style. Rather, they follow their curiosity. It doesn't matter if they've never made work about what they are suddenly interested in. And that's insanely hard.

AC: One of the artists you referenced in the competition was Chris Burden, and that seems to be true of him – he has a body of work that's highly performance-based and a newer body of work that uses erector sets to construct bridges and cities.

AM: Yes, Chris Burden was one of the first artists I encountered, and he certainly has that capacity.

AC: Are you someone who keeps multiple projects in the air at once?

AM: I am, for two reasons. The first is sometimes I let work sit around because I don't know what to do with it quite yet, or how to resolve it. The second aspect is more practical. If I pour a concrete mold, it will have to cure for three days. I don't want to sit around waiting for that. 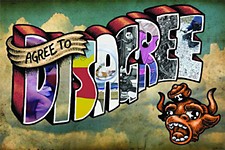 "Agree to Disagree: 2015 Studio Art MFA Thesis Exhibition"
The exhibit by UT graduate students is a mix that ranges from impressive to downright disappointing