To hear the advertisers tell it, that's a huge plus in our contemporary culture of convenience. Whatever the product is, they crow – razor, lighter, diaper, plate, pen – just use it and toss it. No need to mess around with messy refills or cleaning. Get what you want out of the thing, then get rid of it and start fresh.

Of course, the dirty underbelly of such ease of use is an awful lot of disposed-of products gathering dust in our landfills and on our streets. The push toward recycling in recent years has put a dent in this massive discard pile, but we're still left with a staggering excess of dead goods, countless corpses of once-useful objects.

But where most of us see all those trashed bottles, plastic cups, mop handles, empty cigarette packs, and used plastic lighters as hollow shells and worthless junk, Andy Coolquitt sees the raw materials of art. Working as something of a one-man Dead Product Rescue Service, the longtime Austin artist – he started studying art history as an undergrad at the University of Texas in 1984 and has been here pretty much since – scours the streets for cast-off items, brings them back to his studio, and reanimates them – sometimes fusing bits of one with parts of another to make hybrid objects, sometimes just assembling various articles he's scavenged into a sculptural arrangement, and sometimes adding a practical application, as when he runs wires through pipes and affixes light bulbs to them to fashion makeshift lamps. In Coolquitt's eyes, no object is too degraded to be recovered, not a corroded soccer ball, not a cheap synthetic white wig, not a waterlogged paperback of a John Grisham novel, and certainly not all those little throwaway lighters found in such abundance where addicts gather to smoke crack. The color, the texture, the shape – there will always be something about a scrapped object that retains visual interest, that can be salvaged and combined with another bit of urban flotsam and jetsam to intrigue the eye, to tickle the mind, to make a statement.

"Andy Coolquitt: Attainable Excellence" at AMOA-Arthouse's Jones Center for Contemporary Art – the artist's first showing in a museum! – will give you a good feel for how Coolquitt sees the world. Strips and bands of color pop from his sculptures, the vivid hues of his collected objects playing off one another, like the little boxes in a Mondrian painting or, alternatively, the crayons in a Crayola box: the long pink handle of a plastic cloth mop standing next to some equally long wooden stakes stained with pink paint, one stack of disposable lighters of various shades of red alongside a stack of various shades of blue, a stack of dozens of blue lighters in the middle of which is a single orange lighter, a long metal pole welded together from sections of yellow, black, green, red, white, black, and green. An object that's dead can still boast the color of life. Groupings of similar objects suggest the discarded finding fellowship together, as with the assorted long poles and planks standing alongside one another inside the steel cube framework of this vitrine don't work or the wooden, ceramic, and stone hands – several with extended middle fingers – atop the box in Modernish. And when pieces of objects are reconfigured or different objects fused together, they can do so with a whimsy or wit that defies their status as obsolete: the playful metal curves of many of Coolquitt's lamps, the tall, curved pole with each end sporting a wooden hand shooting the finger. (I think Coolquitt has probably set a record here for most flipped birds in an Austin museum exhibit.) And, of course, there's all the light radiating from these works, proof that even the disused can be refitted to provide something of value – indeed, something we prize highly, a thing of warmth and comfort, the thing that enables us to see.

Coolquitt's creations aren't illuminating just gallery walls, however. They shine a light on how casually we dismiss things from our lives, what little heed we give things when we think they're of no use to us. The wear and tear on the items in Coolquitt's works – he makes no effort to mask the scratches, tears, or stains in repurposing them as art – makes clear they were reclaimed from the trash bin and the streets, and you can't look at such objects for long without connecting them to the people who once used them. And who were they, the folks who kicked that soccer ball and swept with those brooms and drank those 40s and flicked all those Bics? Were they the kind of folks who stroll through museums looking at sculptures made from the dross and dregs of our material existence? Possibly. But some no doubt were folks getting by on the streets themselves, people discarded by society once it had gotten all it could from them, people we think are of no more use and so have cast aside and give no more thought than we do a ballpoint pen that's out of ink. Coolquitt shines a light on them – for them – too. He isn't in your face about it – there's no "J'accuse!" shouting from his sculptures – but like the objects Coolquitt gathers from the dust and asphalt, it's there if you look for it.

Most of the work in "Attainable Excellence" is laid out in a large open space on the second floor gallery, which is a fine way of viewing it, and Coolquitt has given careful consideration to how the pieces are arranged and relate to one another. But he's also set one of the movable walls to create a narrow corridor on the gallery's northern end and positioned a number of works in there. It sets up a very different feel, an intimacy with the art that you don't experience in the larger space. You might be in an alley, the kind that Coolquitt frequents to obtain some of his materials, the kind that runs right behind the building where this art is showing, and the pieces in it – these tall, thin poles and planks adorned with extended middle fingers and wigs and all those softly glowing bulbs, leaning casually against the wall – tributes to people who lived and died there, each the staff to some warrior or shepherd of the alleyways. Coolquitt invites us to walk where he does and gives us the light to see what we might otherwise have forgotten to look for. 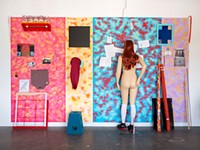