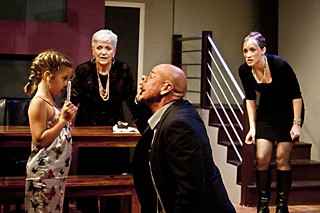 Carving up more than turkey: (l-r) Sadie Dragoo, Lana Dieterich, Ken Bradley, and Liz Fisher in The Pain and the Itch


There are some things in life you can count on. One of them is that a fantastic set is in store when attending a show at Hyde Park Theatre – especially when that show is produced by either HPT itself or Capital T Theatre, a company that frequently treads the tiny venue's boards. With The Pain and the Itch, though, Capital T Artistic Director Mark Pickell (who doubles as the production's set designer) has outdone himself. Before a single word is spoken, we're transported to the open-concept abode that will serve as the backdrop for the remainder of the evening – a world where every detail is key. And just as Pickell's set (lit with equaled nuance by Patrick Anthony) pays incredible attention to subtle detailing that will frame the shadowy events to come, so too does the imminent production brim with nuance.

I wasn't surprised when Capital T announced that it would program The Pain and the Itch, which falls squarely into the Tracy Lettsian aesthetic that has by now become quite familiar to the company's patrons. From Killer Joe to Bug to its most recent production, Exit, Pursued by a Bear, Capital T has proudly carried the torch of the Dysfunctional Family Drama throughout its six-year history. And while neither Bear nor Itch quite lives up to Letts' works in terms of writing for the subgenre (what does?), Pickell and crew have established a solid track record for exposing many a seedy innard. But unlike the trashy motel room aesthetic that seeps from many of Capital T's "dysfunctional" plays, The Pain and the Itch (penned by Pulitzer winner Bruce Norris, author of the acclaimed Clybourne Park) doesn't take its audience into a space that causes the skin to crawl simply by virtue of its setting. Here, the lines are strikingly sleek. The decor is tasteful, the place spotless. Too spotless. Thanksgiving dinner is ready. And all hell is about to break loose.

Although there were, for me, some confusing moments along the ride (as well as a few somewhat flat "surprises"), the evening can be summed up in one cliche: "You'll laugh, you'll cry." Norris is especially adept at evoking a broad range of emotions from his characters (and, at least on the night I attended, from his audience). And the characters in Capital T's production are played by some of Austin's finest. Itch doesn't boast the gravitas of sister play August: Osage County, but thanks to this cast and creative team, it does take one to unique places on the same map. It's a journey very much worth taking (but leave the kids at home).

READ MORE
More The Pain and the Itch

Culture Flash!
American Fiesta makes the finals of a national new play award, the Rude Mechs get their Gun from Creative Capital, and Katalin Hausel lands the Umlauf Prize