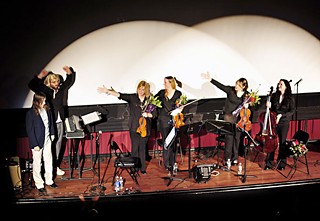 Looking for a little mid-autumn elimination tournament to tide you over until March Madness rolls around? Golden Hornet Project has some serious – okay, maybe not so serious – face-off action on tap in its String Quartet Smackdown, set for this coming Saturday at Scottish Rite Theater. Now, you won't see any cellists nailing three-pointers from midcourt or violinists taking it to the hole, but you'll hear hot, new melodies racing up and down the scale, charging rhythms, and all manner of compositional layups, hooks, and fast breaks as string quartets go toe-to-toe in this one-of-a-kind new music competition – and, best of all, the decision as to who wins any level of the contest is made by you.

Inspired by the NCAA's bracketed single-elimination tournament, GHP co-commissioners – um, artistic directors – Peter Stopschinski and Graham Reynolds have set up a Sweet 16 format in which eight new works for string quartet are paired up, and in the contest's first round, each has its first 60 seconds played by that Dream Team of the concert hall, the Tosca String Quartet. Following each paired matchup, audience members vote for their favorites via text on their cell phones or other mobile devices, and the votes are recorded live onscreen as they come in. Whichever piece receives the most votes advances to Round Two. The eight winners are paired again, and in each face-off, the first two minutes of each composition is played. Another vote by text, and the four winners go to Round Three, in which the first three minutes of each piece is performed. Another vote, and the top two are heard in their entirety (which won't exceed four minutes and 15 seconds, as stipulated by the Smackdown rules). After the final tally, the last quartet standing earns its composer $1,000.

Lest you think this is some loose blacktop pickup game among weekend composers who noodle musically on their laptops between half-caff cappucinos at Cherrywood or Bennu, know that GHP's call for submissions over the summer drew more than 100 entries – some of them from such distant corners of the globe as Hungary, Iran, and Japan – with entrants showing some major muscle on the compositional court. Stopschinski and Reynolds made their choices by listening to the submissions without knowing who had written them, and the 16 they selected include works by composers from near (Andrew Sigler, Austin Critics Table Award winner Steven Snowden) and far (Ivan Bozicevic of Serbia/Croatia; Argentina-born, Germany-based Juan Maria Solare). Here's the full list above. Look 'em over, and get an early jump on the bracketing.

Simon Fink, "Thunderstorm Over I-80 on the Plains"

Sarah Norris, "Stalin Does the Robot" Golden Hornet’s String Quartet Smackdown IV
In this “hoot” of a competition, every one of the 16 compositions was a gem, but only one was voted the champion Shawn Sides and Graham Reynolds: Rude and Golden
How two of Austin's top creative stars meld a busy life of art and love