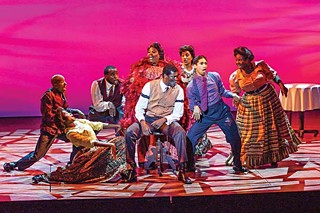 
We have difficulty perceiving our lives as part of history, and for much the same reason that fish don't perceive water: We're always swimming in it. History is happening everywhere around us at all times – in seats of governmental power and the actions of those on the national stage, but also in the progress of our culture, the advances in technology and social mores and art that filter down to us through household gadgets, fashions, pop music, and jokes that affect how we go about our daily business and regard others different from ourselves. Being in it, we don't take notice of history or its currents and eddies sweeping us along. But every so often, we're told a story that makes clear our place in history, how it's shaping us as we are making it. Ragtime is such a story.

In E.L. Doctorow's novel, the actions of his characters are interwoven with the historical currents of early 20th century America. The emergence of ragtime offers a route to success for African-American pianist Coalhouse Walker Jr., allowing him to buy a Model T – widely available and affordable just then owing to Henry Ford's innovations with mass production – but with European immigrants still clawing their way up America's ladder of prosperity and acceptance, the advancement of blacks fuels resentment and prejudice, leading some bigoted Irish firemen to trash Coalhouse's car. The birth of the movies creates a career path for a Latvian emigré, the fiery rhetoric of Emma Goldman awakens the conscience of a young dandy, and on it goes throughout the tale, the shifts in the culture pulling on the people living through them – a quality that playwright Terrence McNally, composer Stephen Flaherty, and lyricist Lynn Ahrens used to magnify the emotional tensions and dramatic scope in their musical adaptation.

Telling their story onstage requires a grand scale, and while it's not impossible to imagine Zach Theatre making a go of it on its Kleberg Stage, that staging wouldn't have had the expansiveness or fullness that the new Topfer Theatre affords. When 50 people sweep across the stage at once, we see a nation, and as they warily circle one another in groups of whites, blacks, and Europeans new to America, we feel more keenly the divisions in it. This greater space they move in also makes more room, literally, for the epic gesture or backdrop – designer Michael Raiford's monumental Morgan Library mural or the upside-down, chained Houdini lowered from the flies. The scale encourages a greater lushness in Jason Amato's lighting and Susan Branch Towne's costumes. As the actors sing, the music supplied by Allen Robertson, working for the first time with a 15-piece orchestra, is richer in texture and lyricism, drawing us deeper into their expression of feeling.

Indeed, our investment in this telling wouldn't be deep without actors skilled and sensitive enough to convey the powerfully conflicting emotions within and about the characters. Artistic Director Dave Steakley has called on many of his most seasoned performers here, and they give full voice to these figures, in all their complexities and contradictions. Jill Blackwood plays a sheltered woman of privilege whose eyes to the world are opened when she opens her home to a black unwed mother and her baby; she grounds the character in such compassion that her passage from her old life is piercing. As her husband and embodiment of that old life, Jamie Goodwin bristles with patriarchal impatience, yet leaves room for flashes of loss and honor in the man. Andrew Cannata strikes sparks as an ardent Younger Brother, Meredith McCall stokes fires of revolution as an unshakable Emma Goldman, and Janis Stinson conjures a century's worth of sorrows singing "Till We Reach That Day." Through these and other Zach regulars, we grasp the breadth and depth of Ragtime's drama.

Two of the most compelling performances, though, come from newcomers to Zach. Andrew Foote's Tateh is a survivor and a striver, almost vibrating with the energy to make good in this new country, to provide for his little girl; his quickness and wit make it easy to believe Foote's Tateh rises rapidly through the cinematic ranks. As Coalhouse, Kyle Scatliffe's eyes blaze like two headlamps, and the future full of hope and opportunity he sees with them is as set as the lines on a road map. When that future is lost, the righteous anger clouding his features is fearsome, but Scatliffe never loses Coalhouse's dignity and probity. In "Make Them Hear You," he calls for justice with the purity of a pealing church bell.

As we witness Coalhouse's rise and fall, and the way the world works on all the characters, their times influencing their actions, we come to see in them our reflection. We, too, live in a time of great changes, some of which inspire hope and some fear, and too many of us still move in separate groups of whites, blacks, and immigrants, warily circling one another. In a day when this has figured into the debate over our direction as a nation, when we have the opportunity to vote on it, Zach's staging of Ragtime is remarkably timely. It reveals to us how we live in history and how we bear responsibility for making it. 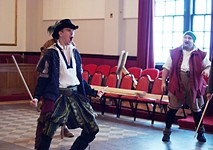 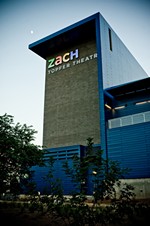 Wheels of a Dream
With the long-awaited Topfer Theatre, Zach races full-throttle into the future