Heather Woodbury is so fucking relevant. Last week, political pundits across the nation hyperventilated about the absence of climate change from the presidential debates. Then a massive storm strong-armed the Northeast into watery submission. And all the while, Woodbury (the L.A.-based performance artist known for her mesmerizing one-woman stage epics) darted around the Vortex in her new 12-episode masterpiece, As the Globe Warms. If you're a responsible citizen, you'll do two things in the next two weeks: vote, and see this play.

Woodbury's primary concern is climate change, of course, but alone on an almost bare stage, she also becomes an engrossing embodiment of just about every crucial political issue America faces today, including the partisan divide, abortion, drug addiction, war in the Middle East, the housing bubble, teenage bullying, and illegal immigration. These are hefty topics for even the most accomplished playwright and performer, but Woodbury expertly folds them into a novel-like narrative that provoked in me some of the most profound pity and fear I've ever felt in a theatre.

I eagerly spent some 10 hours spread over five evenings – all but one part of the series – watching as Woodbury portrayed some hundred characters involved in a heated controversy over the impending destruction of the endangered Butterscotch frog's habitat in fictional Vane Springs, Nev. Woodbury takes us to Queequeg's Coffee Shop, where Lorelei Ray, a Pentecostal preacher's daughter, first meets Reed Ferris, the energetic herpetologist who's determined to save the frogs. We spend time in a trailer park behind a casino, where the working-class Johnson family – Melinda, Melanie, Melissa, Melody, and Nicole – struggle to keep afloat. We meet a hoard of Christ-centered teens at a conference in Daytona. Then there are the inhabitants of Indian reservations across the Midwest, a family of whirling dervishes in Houston, and two anarchist historians in Paris. Oh, and the voices of dying, endangered animals, as interpreted by Lorelei.

Clearly, As the Globe Warms is a doozy of a story. And in fact, this world premiere production is only a fraction of the original script; Woodbury worked with director Michael Yawney to masterfully condense the 33 episodes she wrote in 2010-2011 into a digestible 12 hours. The narrative of this series flows so smoothly that, unlike some of its addictive television counterparts, you don't need to watch from the beginning to enjoy (though I promise that you'll want to).

With her wispy blonde hair pulled up into a ponytail, and offbeat outfits that frequently include a netted shirt and purple patent go-go boots, Woodbury would fit in on the Drag or in a co-op. But once she opens her mouth, you almost forget what she looks like; it's like watching a woman possessed. She transitions easily from character to character with an impressive palette of voices, even in large crowd scenes and steamy sex scenes. Heather Woodbury's As the Globe Warms is a beautiful experiment in soap opera meets PSA. The drama will suck you in, and then pointed commentary on climate change will knock the wind out of you. 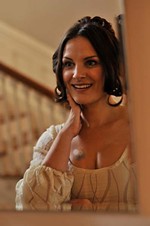 The Last Days of Desmond Nani Reese: A Stripper's History of the World
Heather Woodbury's new solo show about a 108-year-old fallen woman humanizes strippers and storytellers, whores and academics