A befuddling, humorous, and serene journey into the unexpected with two very different couples 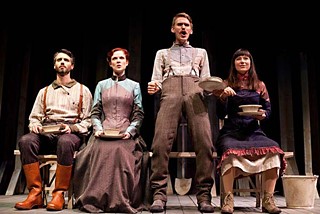 
Had playwright Lisa D'Amour set The Cataract in Paris, her characters might have sighed at each day's end, "Métro, boulot, dodo." Had they lived in New York, they might have complained about the daily grind. But they're in Minneapolis as the sun sets on the 19th century, and the preferred turn of phrase is, "We are all very tired. This is a difficult life." For Cyrus and Lottie Finch (Abe Koogler and Erin Barlow), there are rules and expectations in the town at the Mississippi River headwaters, in a state where "people sleep at night and work during the day."

That is, until Dan and Dinah (Jesse Bertron and Katie Bender) show up on their homestead, newly arrived from Meridian, Miss., and seeking a place to stay. "Wouldn't it be amazing," asks Dinah, once she and her hardworking lover are settled in, "if something unexpected happened?" What if flowers popped up from the floorboards or Dan grew fur on his hands? As they amble through their boarders' rigid mores, the newcomers seem not to notice that they are the unexpected, mysterious happening.

We've heard this story before: Character A lives in peace until Character B suddenly arrives and changes everything. But here it turns out the audience is as unsuspecting as the poor saps onstage. Sure, The Cataract has unity of time and place, but wait – does it? A befuddling and humorous and serene experience, somewhere between dream world and waking life, it sabotages our expectations, leading us ever so poetically into mysteries upon mysteries.

The University of Texas Department of Theatre & Dance production has been thoughtfully, purposefully crafted – words, action, and design coalesce into something complete. Director Will (formerly Daria) Davis sculpts a stylized world that gently cradles the script's complexity. With the director's keen eye and the cast's fine performances, we empathize with the foursome at their most naturalistic – the women giggling as they share secrets, the men guffawing over beers at the saloon – and feel far away indeed in their strangeness – narrating their days, staring out the fourth wall, pulling flowers out of their eyes.

The show's designers have created a stunning environment for the curiosities of script and staging. Though mold in the cozy Brockett Theatre pushed the production into the Payne's cold proscenium, set designer William Anderson creates intimacy with a gorgeous sloped platform surrounded by sand. Lighting designer Ryan Andrus' dramatic spotlights and scrumptious projections mesh with costume designer Kaitlyn Aylward's robust garb and Anderson's innovative use of planks and stools to create different spaces and times.

Stepping out of The Cataract's magical world, I felt a little more beautiful and a little more pensive. I'm searching for the unexpected in my daily grind.