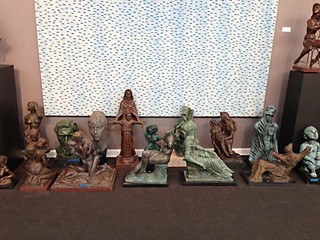 Just as our city's first great sculptor, Elisabet Ney, had her Formosa, midcentury master Charles Umlauf had his home and studio – like it, a space carved from Austin's natural beauty where this artist fashioned so many of the richly expressive and human sculptures for which he is remembered. Also like Ney's, Umlauf's home and studio belong to the city of Austin, though it has never become the visual art center that Charles dreamt of when he and his wife Angeline made a gift of the property to the city in 1985. (It was land down the hill from the home that was developed into the Umlauf Sculpture Garden and Museum in 1991.) Scores of artworks remained in the home following Charles Umlauf's death in 1994, with more than 100 of them released for sale by the family in 2008. Now, with the passing of Angeline this past June, the family has decided to remove all the remaining works – many of which have never left the Umlauf property – and offer them to the public for purchase.

Russell Collection Fine Art Gallery, which is the sole representative of the Umlauf estate, will be displaying these works as it presents them for sale over the next three weeks. "Final Farewells," as the exhibit is titled, includes paintings and drawings as well as sculpture, with work in marble, limestone, and bronze, ranging in size from nine inches to eight feet. Even if you aren't a prospective buyer, this is an opportunity to see some of the lesser known works by this quintessential Austin artist in public before they disappear into private hands.

A reception will be held Friday, Oct. 19, 6-8pm, at the Russell Collection's gallery on West Sixth, with some of Charles and Angeline's six children on hand to answer questions about the works (and perhaps about growing up in South Austin when it was still largely rural). The reception is open to the public, though an RSVP is requested. 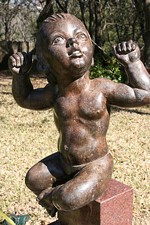 Charles Umlauf: One last sale for the city's sculptor
More than 100 works from the estate of an artist who embodied Austin are being offered for sale by his family