The comedian enthuses about easing the pain, Larry David, and ex-roomie Conan O'Brien Chicago native and Second City alumnus Jeff Garlin has been in the funny biz for three decades as an esteemed stand-up, filmmaker, actor, writer, producer, and voice artist. His role as Larry David's loyal but amoral manager on HBO's Curb Your Enthusiasm is an inspired showcase for Garlin's seemingly effortless mastery of improvisation. The comedy veteran recently spoke with the Chronicle in advance of his Oct. 13 performance at Stateside at the Paramount.

Austin Chronicle: You credit Second City for shaping your knowledge of improv, acting, and directing. What are some of the main tenets that you learned?

Jeff Garlin: As an actor, I take what the other actor gives me and then I give back and I try to make the other look good. And if two actors are paying attention to what the other person is saying and trying to make the other person look good and justify what they're saying, then everybody wins. That's a big deal to me. Another one is less is more. You do what you need to do, and don't do anything more. In terms of being creative, keep it simple.

AC: When did it become apparent that you and Larry David have such a special chemistry?

JG: In the auditions for the special [1999's Larry David: Curb Your Enthusiasm], it was kind of ridiculous. We were like, "Have we been a team for 30 years? This is crazy." It was right at the very, very beginning.

AC: And that was your idea for the special, correct?

JG: Yes, it was initially my idea, but I told Larry David, who is a genius, and he expanded on it and made it better than anything I could have ever done.

AC: Has the door been closed on a ninth season?

JG: No, not at all. I say there's a decent chance.

AC: Could you share one of your best memories from rooming with Conan?

JG: I have a lot of great memories. One of them is that we used to do a fake talk show in our living room where he was George Takei – you know, Sulu from Star Trek – and his guests were Adam West – who I would do – and Jeff Garlin – obviously me. This was long before he ever had any idea that he would ever host a talk show. And we would do it every day; it was really fun.

AC: Within the context of being a lofty goal, you wrote, "Easing people's pain, that's my job."

JG: Yes. The purpose of my job is to ease people's pain. I mean, I want you to laugh and to have a good time, but it's not really in general to keep the good times going because everybody has ups and downs. And at the end of your day, if you can come see me or any other funny comedian in concert, if you can turn on a TV show like Curb Your Enthusiasm, it eases your pain and you don't worry about anything for a half hour or [however long]. I think that's my job, and I'm proud to have that job, and any comedian that looks at it more that it's about him or her and their ego – they're not that funny or not that important.

AC: Could you tell your favorite joke?

JG: A guy goes to the doctor and he says, "Doctor, I'm so overwhelmed when I wake up in the morning. I'm filled with anxiety, stress, depression. I feel like just lying in bed all day and not moving. Forget even going outside, I don't even want to open the window. I'm a mess. I don't know what to do." And the doctor says, "I'll tell you what you do. You get out of your bed and you go see Coco the Clown. He's in town now performing, he'll make you laugh, he'll make you forget about all your problems. Go see Coco the Clown." And the man says, "But doctor, I am Coco the Clown." 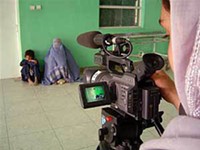