An earnest and timely, if uneven, effort to bring Americans up to speed on presidential history 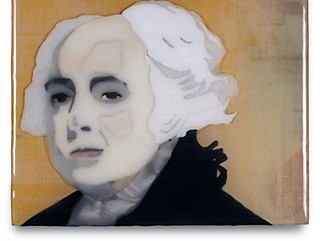 From the art show "Presidential Losers," running in tandem with 44 Plays for 44 Presidents, John Adams by Kent Michael Smith


With 44 Plays for 44 Presidents, Gnap! Theater Projects provides an election-season primer on the history of the highest office in the land. In this quickly moving production, five actors offer highlights on each of the 44 men who have ascended to the presidency, and they trace a bit of American history in the process.

Some of it is quite interesting. It's not often remembered, for example, that Abraham Lincoln witnessed the deaths of several family members before ever arriving in Washington. Most people today don't even remember the name Franklin Pierce (the 14th president), who kept his wife as his closest advisor and later died from the damage caused by his alcoholism. Grover Cleveland (No. 22 and 24), on the other hand, was elected to office twice, sandwiching the term of one Benjamin Harrison (No. 23).

The overall production is a mixed bag. That's partly due to Gnap!'s take, under the direction of Shannon McCormick. The staging lacks focus, and there were enough accidents with props on one night (spilled liquid that went unmopped, a scale that tipped before it was supposed to) to suggest that more care might have been taken to coordinate details or else simplify this prop-heavy show. But the blueprint that Gnap! is working from doesn't make its job any easier. The 44 scenes are a scattershot look at the history of the presidency. Some are comedic, some are mime or dance performances, and some try to dig artfully into the panic that might have been felt at those times in history. Some have a narrative structure, others don't. The approaches are so uneven that it makes locating a throughline for the evening difficult.

The goal of the show seems to be to motivate the audience to participate more in the system: adding their voices to the mix of Americans who get to say who winds up in office next. In the end, however, the show is essentially a colorful but chaotic civics lesson. The script doesn't pick any one angle from which to approach each presidency, and so the selection of which information to present about every man seems haphazard. Economic policy, drinking habits, wartime experience – anything goes.

44 Plays is politically neutral, by the way: This is not a partisan show in support of any one party or dogma. Rather, it's an earnest and timely effort at bringing regular Americans up to speed on our own history. 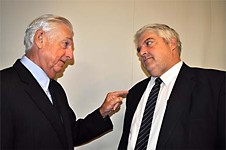