Just in time for the election, Presidents take the stage 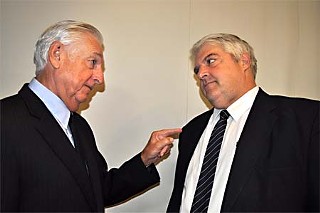 When 2012 began, I expected to see presidents and presidential contenders crowding the small screen through the months ahead, but I hardly imagined the same on the stage. Typically, our commanders-in-chief (and those who covet the job) rate about as much time on the boards as insurance claims adjusters, but this has become the Year of the President in the theatre for me, and it could be for you, too. You may recall that one of the summer's surprise hits focused on our seventh president, with "Old Hickory" getting a new look – a kind of emo rock-god makeover – in Bloody Bloody Andrew Jackson (Exhibitionism, June 22). Then, the Oregon Shakespeare Festival staged the premiere of All the Way, an epic new drama from Pulitzer Prize-winning hometown hero Robert Schenkkan about Lyndon Johnson's first year in the White House ("Power Play," Aug. 17). Now, as the countdown to the presidential election enters its final month, comes a pair of productions just aswarm with chief executives.

The bulk of them arrive, like clowns crammed into a single car, in just one of the shows. 44 Plays for 44 Presidents is true to its name, offering a drama for each of the men who have held the highest office in the land. But lest you be frightened off by visions of a production running 88 hours, know that each prez is allotted only two minutes in the spotlight. You'll learn the triumphs and tragedies of every officeholder from Washington to Obama in less time than it takes the guys currently jostling for the job of America's CEO to get through one debate. This speed-dating survey of our men in the Oval Office was created by Chicago supertroupe the Neo-Futurists, who applied their theatrical talents to similar effect in their signature hit Too Much Light Makes the Baby Go Blind, which presents 30 plays in 60 minutes. Providing the Austin premiere is Gnap! Theater Projects, with Director Shannon McCormick drafting improvisers and actors Jay Byrd, Eva Claycomb, Jeanne Harris, Michael Jastroch, and Briana McKeague to embody all our presidents.

While Gnap! is busy showing us who's been in the White House, the Paradox Players will be exploring what it takes to get there. The Best Man covers the bruising battle between two candidates for their party's nomination in the run-up to the convention. Though the race is fictional and the lame-duck president that the contenders court for his endorsement is as well, the play's internecine squabbles, smear campaigns, media manipulation, arrogant and evasive pols, posturing, cynicism, and backroom deals are so true to life that it could pass for a documentary. And its observations about politics are so penetrating that, 52 years after they were first brought to the stage, they still apply – as the success of the play's recent revival on Broadway can testify. Paradox Artistic Director Gary Payne, who directs the production, is counting on that enduring timeliness to draw Austin audiences to the late Gore Vidal's drama. 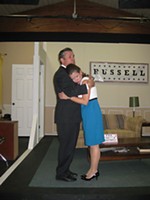 44 Plays for 44 Presidents
An earnest and timely, if uneven, effort to bring Americans up to speed on presidential history