A beautiful play that lightly traces the journey of two well-meaning, imperfect people 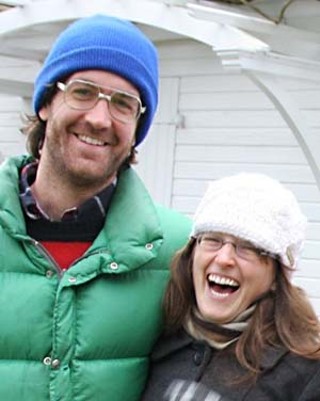 The fire this time: Thomas Graves and Hannah Kenah as Alfred and Agnes


The newest play from writer Steve Moore and Physical Plant Theater does something remarkable. In Agnes and Alfred, exceptionally painful and ugly moments from the human experience are laid bare, yet with such tenderness that it's still fully watchable.

Agnes meets Alfred in a shelter for victims who have lost their homes to wildfire. Both prove to be stragglers in getting their lives back on track, a mutual flaw which practically writes the rest of their stories. Alfred (Thomas Graves) is a dreamer, Agnes (Hannah Kenah) is generally pissed off at everything – but he makes her laugh, and they enjoy a shared sense of mischief.

More or less on a whim, they move into a new apartment together, beginning a journey through the years that includes more than enough pain for two people – some of it brought on by their own missteps, some by the inherent unfairness of being alive. At its most powerful, the play reveals what it is to try and muddle through tragedy alongside a partner. Here's the deal: In happier days, two people promise each other they'll be there, they'll be strong, they'll hold hands and survive what's coming. Then the thing comes. It's not just about one person making it through, or two people finding a way to keep breathing. It's also about mustering the strength to trust that this other human being can rise to what seems like an impossible challenge and still be there.

The loopy Austin aesthetic being what it is, there aren't many local writers who create strong plays with realistic dialogue. With Agnes and Alfred, Moore scratches this longstanding itch. One of the most admirable aspects of his script is how in scenes in which Alfred and Agnes berate each other, it's possible to see how each person could almost be right. This openness to the flaws and goodness of each character is what makes genuine insight possible.

The performances by both leads enable the play to have the impact that it does. Kenah in particular presents a character who's been rubbed raw to the point of bleeding, both by her own doing and events not of her choosing. In a smaller role, Katie Van Winkle also displays a great sense of timing and character.

Director Carlos Treviño leads the actors through the scenes ably, and their performances do him credit. Yet certain transition points seem clunky and slow, with the division between scene changes and the scenes themselves unclear. The action occurs on multiple sets around the Off Center, with the audience moving from set to set, perhaps to reduce the number of blackouts and drawn-out transitions – a good concept, but the staging doesn't take full advantage of it. Some confusing moments may have been due to opening night wobbles.

Overall, Agnes and Alfred is a beautiful play that lightly traces the journey of two well-meaning, imperfect people. It's a small play, but one well worth seeing.