For celebrating one of the rare wins in hate crimes legislation in Texas, this play is worthy 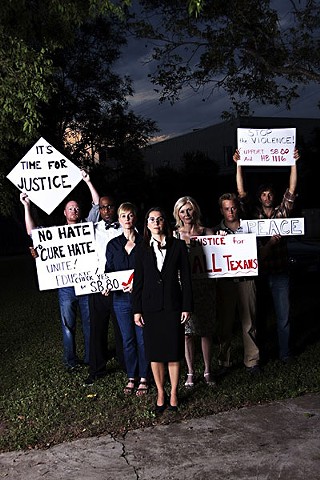 Just cause: the cast of Just Outside Redemption


There's a moment at the beginning of Just Outside Redemption where the play asserts the necessity of its existence: After the opening scene sets up the tale of a late-Nineties hate crime in a small town and the subsequent reaction from worldly city folk, Lesbian and Gay Rights Lobby of Texas leader Dianne Hardy-Garcia (Suzanne Balling) addresses the audience directly, listing by name just a few of the many gay Texans murdered in recent memory. There are many names besides Matthew Shepard's that we ought to know, and any similarities to The Laramie Project in Just Outside Redemption become an indictment of a society that has necessitated multiple stories of people murdered in hate crimes.

Dennis Bailey's drama isn't just an exploration of hate crimes and small towns, though. This is a political story, a fictionalized account of the legislative battle waged by Hardy-Garcia to pass hate crime legislation in the state. In the play, Hardy-Garcia is moved to make the push by the murder of a hairdresser named Billy Thibodeaux near the town of Redemption, Texas. While Thibodeaux, Redemption, and several other characters here are fictional or composites – including Thibodeaux's boyfriend, Jesse Bandel (Ryan Hamilton), and favorite client, Harlene Corf (Beth Broderick) – veracity isn't the point. Between the setup/punchline style of the play's surprisingly light dialogue and the neatness of its storytelling, Just Outside Redemption isn't aiming for documentary theatre.

What it offers is the closest thing you'll find to a feel-good story about hate crimes legislation. The dialogue errs on the right side of cleverness, and the characters are charming. It's expertly cast – Broderick, whose seven seasons on TV's Sabrina, the Teenage Witch more than prepared her for the play's sitcomlike dialogue, does an especially fine job of stealing every scene she's in – and well-paced, finding compelling plot points in the minutiae of the Texas legislature. The set is minimal but elegant, and a trio of screens provide impressive projected backgrounds of photos, drawings, and video that enhance, rather than overwhelm, the proceedings.

If there's criticism to be made of Just Outside Redemption, it's probably in the way the play's contrivances – the dialogue, the fictional characters – offer a neatness that doesn't exist in reality. Everything from Harlene's sudden interest in gay rights to the conversion of the play's ostensible antagonist, the fictional Rep. Wesley Conroe, comes off as a bit pat.

But given the subject matter, it's hard to fault the play much for that. As teenagers Mollie Olgin and Mary Chapa learned earlier this summer, horrifying hate crimes still occur in Texas, and the story of the legislative passage that Just Outside Redemption tells is one of the few unambiguous wins that have occurred here. Celebrating that, even if things tie up neatly, is a worthwhile cause all the same.