Brooks, after a long day in the studio and UT's black-and-white photography darkrooms (Photo by Andy Campbell)

A little over one year ago, photographer Lily Brooks moved to Austin for graduate school. August, as any Austinite will tell you, is the most unforgiving month here. Moving from Boston, Mass., Brooks found the Texas sun unbearable, so she started paying attention to the weather. She became "obsessed with the weather maps, as a kind of prediction distilled down to a cartoonish icon," and also with meteorological technologies, which run the gamut from sophisticated silicon instruments to jury-rigged sundials. All of this to document an ultimately fickle, moving target.

It makes sense that Brooks would put artistic stock in something as inconstant as the weather. A photographer by training, Brooks is interested in liminal spaces; she's photographed people crossing bridges in Boston – unaware that her lens is trained on them in their moments of crossing – and, more recently, she's created a series of portraits of her students at the University of Texas at Austin in that unstable time period between graduation and ... "whatever's next." Yet, for someone who's interested in liminal space, Brooks' studio has all the trappings of a house: comfy couches, a kitchenette, a desk, some bookshelves, and some big white walls. Brooks' spacious studio, located inside the UT art building, is shared with three other graduate photographers.

Austin Chronicle: You and your studio mates all make big prints – so how does that work out?

Lily Brooks: We all lucked out. We're all nice people and so we're able to communicate with each other. We print so large that when we install or de-install our prints, there has to be two of us to handle the work. We're mindful of each other's schedules.

AC: So what kind of space do you try to build here?

LB: I wanted a space where people could hang out and be really comfortable – that's what the couches are about. But most is functional and necessary. We need tables to work on and to store flat prints. Everyone has a bookshelf, and everyone has a table, and we lined them up against one wall this year. We also have three refrigerators [laughs] – not that we all have our own refrigerators, but it just worked out that way.

AC: It's funny because there's three of almost everything in this space. Do you work at home as well?

LB: Yeah, I have a laptop, and I work at home, too. I also do spotting [color correcting] and cut out the paper maps I use in my photographs at home. Photographers can be mobile with their work.

AC: Unlike a lot of artists, your studio is inside a larger institutional and educational setting. You have other artists, but also undergraduate students, administrative folks, and professors walking around. How do you make the transition from the institutional space to the studio?

LB: It's been easy for me to slip into. I feel so fortunate to finally have a studio outside of my home – even in undergraduate I didn't have that! So this is a big deal – and typically photography grad students don't get studio space. I try to have people in all the time to take advantage of this space.

AC: Does that amount of feedback ever become stultifying?

LB: Sure. But I have a pretty consistent cycle. I have a productive period followed by a time when I'm looking for feedback.

AC: So you're now a year out from your move to Austin. Do you feel like you've settled in?

AC: And how do you know?

LB: I know because I had such a productive summer! 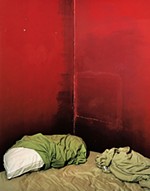