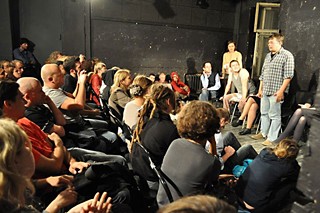 On Sept. 1, I left the States for a three-week trip to Moscow, to visit the Lyubimovka new play festival, an annual, intensive writing lab at Teatr.Doc. The trip was funded by the United States Embassy, with additional support from the Center for International Theatre Development, to further my work in bringing contemporary Russian theatre to Austin via the New Russian Drama Festival that I founded in 2010. My goal was to learn more about the current playwriting community there and, with help from artists such as Maria Kroupnik, a Moscow-based project manager and translator who visited Austin as part of CITD's Beyond the Capitals project (see "Rate of Exchange"), find a play worth translating for the third NRDF this coming February.

At a crucial moment in the life of Russian society, Doc (its nickname in Russia) leads the way among theatres in reflecting and reacting to the country's political upheaval. As an opportunity for dramatists and a center for new plays, Lyubimovka foregrounds the commitment to dramaturgy and experimentation that runs in Doc's bloodstream.

Founded in 1991 by playwrights and artists gathered on Konstantin Stanislavsky's estate in the countryside outside Moscow, Lyubimovka provides a laboratory for young playwrights to develop scripts and enhance their craft. In the early 2000s, the festival became a vital rallying point for the New Russian Drama movement, with Lyubimovka writers such as Vassily Sigarev, Misha Durnenkov, Olga Mukhina, and Maksym Kurochkin (author of The Schooling of Bento Bonchev and guest at this year's NRDF in Austin) going on to international acclaim. Today, Lyubimovka's role as a crucible for young voices and their work plays an outsized role in the city's cultural calendar. Of 439 submissions this year, 15 playwrights under the age of 30 had plays accepted. Readings and discussions of these plays and those of seven more established Lyubimovka playwrights made up the 2012 schedule. Each play is assigned a team of actors, a dramaturg, and a director with a mandate to exercise restraint and let the play speak. The readings draw surprising crowds, with upwards of 80 attendees crowding the Doc on weekday afternoons. This year's most anticipated readings – Yaroslava Pulinovich's How I Became, Pavel Pryazhko's Three Days in Hell, and Kurochkin's Plant Eaters – drew 140 actors, playwrights, directors, critics, and patrons into a space built for half that number.

Plays are chosen on merit rather than political bent, and the themes and atmospheres often veer toward the fantastic. Alexander Arkhipov's One's Own Land pushed film noir into a dystopic future, while Yekaterina Narshi's musical Mom's Around the World saw three mothers travel to the world of the dead via space-taxi to rescue their sons. Kurochkin's Plant Eaters, with its princess searching for far-flung treasures (gold, sex) felt like a fairy tale.

Just as vital as the new plays at Doc are the discussions of them. I was astonished at the rigor of these conversations, often led by major critics or professional dramaturgs, but with all audience members welcome to participate. The only rule was a moratorium on flat-out "I loved it/I hated it," which most observed the spirit of, if not the letter – the first reaction to Dan Gumenny's Femen'ism, a documentary play about a protest group from Ukraine, was "I hated it," and after the packed reading of Kurochkin's play, moderators had to urge the crowd to cut back on the adoration and get to the point.

These amazing dialogues took place in one of the smallest and rawest spaces I've ever set foot in. No sign marks Teatr.Doc's location. To get to it, you duck into an alley, go down a staircase, and round a corner. Inside, a low-slung ceiling makes the tiny black box – smaller by a hundred square feet than Hyde Park Theatre, by my best guess – feel even smaller than it is. A half-dozen par cans hung for the readings, catching the texture of black paint peeling from brick walls, and I could hardly imagine a dozen more lights squirreled away elsewhere. Still, I felt at home, reminded of the warehouse stages on Austin's Eastside: the Off Center, Salvage Vanguard, the Vortex, the Blue – each sporting a similar rough and dignified aesthetic, each home to some of Austin's most potent theatrical voices.

None of Moscow's roughly 120 repertory theatres are so modest technically. For twice the price of a Doc ticket, you can go to the Moscow Art Theater, where the mainstage will undulate, tilt, and rotate at the push of a button and actors can flit through the air via cable-harnesses, à la Spider-Man. But for all its technical limitations, Doc continually invents ways to stay connected to its loyal audiences. Its political orientation has never been so urgent as in recent months.

After fraudulent elections in December 2011 ensured the United Russia party's stranglehold over parliamentary votes, hundreds of thousands of Russians began flooding the streets in regular protests against Vladimir Putin's presidential bid. Since his March re-election, the government has systematically repressed criticism, most notably by sentencing female rock group Pussy Riot to two years hard labor for their 30-second "punk prayer" at Cathedral of Christ the Saviour. The Pussy Riot controversy split Russian society, with half aghast at the desecration of Russian Orthodoxy's holiest site and half aghast at the severe punishments for anti-government protest and the cozy relationship of church and state (prior to Putin's re-election, the church's Patriarch Kirill called Putin's 12-year first era a "miracle of God"). During Pussy Riot's trial, though, the courtroom was free of cognitive dissonance; the judge steered all argument toward the issue of church desecration.

The theatre community has been largely mute on political issues over the last year – partly because repertory theatres aren't nimble enough to respond to rapidly evolving events, partly because they rely on government subsidies to stay open. However, Teatr.Doc's politically contentious repertoire, curated by husband-and-wife artistic directing team Elena Gremina and Mikhail Ugarov, has stayed in touch with the political turmoil. This past year featured a new version of Gremina's One Hour 18 Minutes – a 2010 documentary play on the death of attorney Sergei Magnitsky – and her Two in Your House, about the house arrest of Belarusian dissident, poet, and presidential candidate Vladimir Nekliayev, found resonance with the repressive political atmosphere.

Most interestingly, within a week of the Pussy Riot verdict, Doc artists assembled a meditation on the trial and its consequences: Khamovnichesky Court. The Sequel, in which three of the defense lawyers, a journalist, and the husband of Pussy Riot member Nadezhda Tolokonnikova discussed their personal feelings on the trial, in counterpoint to video footage. The Sequel sees Doc's artistic directors continuing to riff on documentary theatre forms, experimenting with what they call Theatre of Witness, mixing artists and non-acting community members – witnesses to key events – to explore the impact on those who experienced events directly, providing a forum for debate.

A generational and cultural shift in theatre leadership is also underway. Kirill Serebrennikov, whose productions of Zoya's Apartment and Frost-Bitten Youth have taken jabs at Putin and celebrated political dissent, was recently appointed artistic director of the moribund Gogol Theater, and other provocative directors and playwrights – Victor Ryzhakov, Mindaugas Karbauskis, and Doc's Ugarov – have been picked by the city's Culture Committee to helm their own theatres. On the final day of Lyubimovka, Ugarov handed off leadership of the festival to the younger Mikhail Durnenkov.

And on the streets, protests continue. Last Saturday, tens of thousands in Moscow and St. Petersburg rallied against Putin – so even as the president ratchets up the pressure to fall in line, the people, and Doc, press back, and inexorable forces in the theatre community seem close behind.