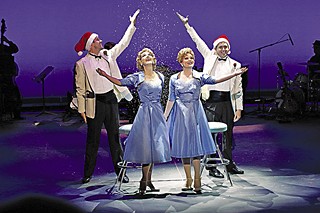 "To do, or not to do?" That is the question faced by the artistic leadership of theatres across the globe every year. And what these leaders decide to do in terms of programming is most heavily influenced by what they want their theatres to be. That's especially crucial when opening a new theatre, as Dave Steak­ley, Zach Theatre's producing artistic director, well knows. For several years, he's been preparing for the opening of the Topfer Theatre, a new mainstage that almost doubles the seating of Zach's previous one and vastly expands its technical capabilities. Steakley explains how that affected his choices for the 2012-13 season.

"I selected Ragtime to inaugurate the Topfer because it is of an epic scale befitting our grand opening and I wanted a work which hasn't been produced locally. It allows my Austin-based design team and me to use all the new technology we have invested in and employs over 50 Austin actors, which is important to me because we have charged Zach with being a theatre of, by, and for Austin. I wanted a musical that would provide the opportunity to use a full orchestra in our new orchestra pit and show off the acoustics of our new space. Thematically, [Ragtime] has much to say about this time in Zach's life and in our lives as Americans, as some characters welcome and embrace change, while others struggle with it."

"The holidays are a very important time at Zach financially to make the year work as a whole, and it's important to me that we are welcoming families in Austin into our theatre. One of the ways that happens is with populist entertainment. I wanted a show that would be immensely popular and that hadn't been done in Austin. My hope was that we could produce [this] very big show, but in the intimacy of our theatre the joy you feel hearing great Irving Berlin songs like "Sisters" and "Snow" come to life would reach you with immediacy."

"At a Zach party a couple of years ago, Anton Nel and I struck up a conversation about 33 Varia­tions [a play about Beethoven compositions, which are played during the performance]. Anton is one of the world's greatest pianists, and he lives right here in Austin. My motivation first and foremost was to get this tremendous hometown artist on our stage. The Variations are complex and widely varied in style, which allows our audience to see the full range of Anton's gift."

"When UT College of Fine Arts Dean Doug Demp­ster broached the idea of UT commissioning a new play from [playwriting professor Steven Dietz] that would premiere at Zach, I immediately said, 'Yes!' I also wanted us to have a premiere on the first season to say we'll always have a slot for a new play or musical on our season. The financial stakes go up so much because of the cost of taking a risk, but that experimentation is essential to the life of our art form and reflective of the culture of creativity in Austin."

"Harvey for me is mostly about providing a vehicle for Martin Burke, as he's an actor with whom I've happily logged thousands of hours on so many plays. I also know it is a play that I can completely cast in Austin with some of my favorite actors. There was something about moving into a new contemporary theatre that made me want to do a classic American play that I have great affection for, but one I've never seen onstage. When I surveyed my staff, most had seen the film of Harvey, but no one had seen it onstage. That's exciting to me."

"One of the reasons we designed the Topfer with a huge stage house and maximum flexibility in the traps and flytower is, I want Zach to be a launchpad for work that is moving to other regional theatres, embarking on a national tour, or looking for a regional home before going to Broadway. Zach has been selected to be the theatre from which a new musical called One Night With Janis Joplin will launch its national tour next summer. The Topfer creates the opportunity for us to make Austin a priority for exciting new works, so instead of seeing them on a national tour after they've established themselves, Austin becomes the tastemaker that will send work to Broadway."

"There are huge growth steps in single ticket sales and contributed income which will need to come to fruition in this first year to make the season a success. We have increased Zach's staff in each department, particularly in production, because the new facility is creating jobs we never had at Zach before. I've selected shows which have very large casts, so our investment in artistic fees is up significantly, but that's also commensurate with our goals to hire local artists first and foremost. This is all growth which has been planned for, but it is still a huge step and we feel a tremendous responsibility to produce great work and still end our year fiscally in the black. That requires incredible discipline, nimbleness, and the ability to respond thoughtfully to unexpected changes, and that always becomes more challenging the larger an arts organization gets.

"[I] think of something the great Liz Carpenter said when I was interviewing her for my play Keepin' It Weird. She was talking about Austin and saying that the city was having to wrestle with the question: "How do you grow and still hang onto your soul?" That's really the key. The game has changed. Zach will never be the same as it was. If we stayed the same, we'd eventually die off. This is a moment of transformation and evolution. It's my job to ensure we hang onto our soul as we make this change."