From the Arts Harvest, our critics pluck choice treats 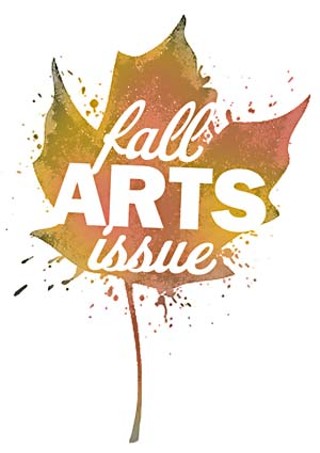 With the autumn comes the feast, in the arts as well as in the harvest. This season is such a cornucopia of cultural delights that we couldn't contain all our recommendations on this issue's fall calendar.

Two discarded NASA astronauts (played by Jason Newman and Fusebox's Brad Carlin) are recruited by a private space agency circa 1985 to mine the tail of Halley's Comet – and the mission takes a psychologically devastating turn deep into the recesses of those flawed, human minds. This is an Austin premiere directed by Jeffery Mills from a script by him, Jason Newman, and Brent Werzner. Featuring an original score by Graham Reynolds, sound by Buzz Moran, set by Ia Ensterä, and the whole thing unraveling from the past into an ugly future, right now. - Wayne Alan Brenner

Pipe organ rock star – an apparent oxymoron if ever there was one, right? Not when Cameron Carpenter's at the keys. This rebel with a very real cause – "to destroy whatever notions you may have about what an organ can do," according to CBS' Tracy Smith – puts the pedals to the metal as he revs up the instrument to its fullest. Ever heard Chopin's "Revolutionary Étude," with its famous left-hand fireworks (or Sousa's perennial "Stars and Stripes Forever" piccolo solo) transferred to an organ's pedal board? These are just two examples of what Carpenter has up his sleeve – and pants leg – in a repertoire chock full of flashy delights, reminding us that the centuries-old instrument is still piping hot. - Adam Roberts

Sarah Saltwick has been one of Austin's brightest rising young playwrights for a few years now, and – if workshop productions, FronteraFest pieces, and staged readings are any indication – she's stepped up her game while working as a Michener Fellow at the University of Texas. So it'll be very exciting to see her interpretation of a classic work like The Scarlet Letter that deals with the themes she's explored in her earlier material. Plus, it's a fully realized production with a UT Department of Theatre & Dance budget. Saltwick's work has been compelling when it's been little more than actors in chairs with scripts in hand, so it's high time we see it properly envisioned. - Dan Solomon

I'm a theatre writer. I know little about early music or Baroque choral compositions – but I can tell you what I love about this music. These works present voices singing in a manner so different than how we typically hear them that the simple and essential quality of the vocal performances cleanses one's brain. Also, this presentation of KMFA's twice-weekly show by La Follia Austin Baroque will feature an instrument known as the sackbut (it's like a trombone). Y'all can have your music theory. Me? I'll be sitting in the back, loving the music and snickering at the sackbut. - Elizabeth Cobbe

"I Have Seen the Future: Norman Bel Geddes Designs America"

Remember when the future looked cool – before we got all locked into post-apocalyptic urban hellscapes crammed with boxy concrete skyscrapers and rusting industrial zones? The Ransom Center does, and returns it to us with this retrospective of Norman Bel Geddes, a theatrical designer par excellence whose turn toward architecture and interior design in the 1920s coincided with the rise of science fiction, urban planning, and Art Deco. His streamlined versions of dressers, appliances, and cars are impossibly sleek and chic, and his vision of an entire city of the future – a mammoth scale model created for the 1939 World's Fair – will have you swear off dystopias forever. Bye bye Blade Runner. Hello Futurama! – Robert Faires

The Tudors: From Henry to Elizabeth

Daniel Johnson – he's the local music man without the T in his last name – and his Texas Early Music Project brings you music from the time of the Tudors, those royal Brits of yestreen, whose Hollywooded, hottied-up shenanigans have filled so many small screens in recent years. There'll be music written by Henry the Eighth himself, as well as works by Henry's court composers and composers appointed by Elizabeth I, too. This night of really old-school brilliance features solo and ensemble singers, with viola da gamba phenom Mary Springfels leading the consort of viols. – Wayne Alan Brenner

Sure, the whole town's a-buzz with talk of Steve Moore's Adam Sultan Project, coming to Salvage Vanguard next year. But first, we get to experience this new stagework from Moore and Physical Plant Theater: an intense drama about the relationship of two people, first thrown together at a fire-evacuation shelter, over the course of 17 years. You know when it hurts to laugh, and when you laugh because it hurts? Directed by Carlos Treviño and featuring Thomas Graves, Hannah Kenah, and Katie Van Winkle, this show is not recommended for anyone younger than 17. – W.A.B.

You know Bill Cosby – the man's a national treasure! He's also as funny as his career is long, and if you recognize him mostly as Dr. Cliff Huxtable from the most popular primetime show on network TV back in the day, oh, friend, you're missing out, y'see? There'll be, in this lucky audience at the Bass Concert Hall, geezers who recall the Cos from the first iteration of TV's I Spy, middle-aged hipsters who grooved to Fat Albert & the Cosby Kids during their childhood's Saturday mornings, and people of all ages who've laughed themselves into loss of bladder control while listening to the man's classic series of comedy albums from the Sixties. – W.A.B.

Last year Texas Performing Arts embarked on its Star Trek-like three-year mission to explore strange new worlds of classical music, to seek out new acts and new compositions, to boldly go where no musician has gone before. Already, the Mellon Foundation-funded initiative has brought us the weird (The Infernal Comedy: Confessions of a Serial Killer, with John Malkovich) and the wonderful (the Ricky Ian Gordon-Mark Campbell Civil War song cycle Rappahannock County). Now comes the premiere of an epic percussion opera by Alaskan composer John Luther Adams. In Ilimaq (Inupiaq for "spirit journeys"), Wilco drummer Glenn Kotche whales away on 19 instruments for 50 minutes, accompanied by sound from live electronics and Alaskan field recordings. After a no-doubt sorely needed intermission, Kotche will be joined by bassist Darin Gray for a set as the duo On Fillmore. Let's go exploring! – R.F.