In the latest chapter of this sci-fi spoof's success story: an international tour and Broadway! 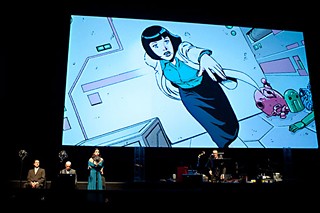 When last we left our intrepid homegrown retro radio serial/graphic novel, it had just escaped the clutches of the insidious carrot-topped cable overlord called Conan and made its safe return to Planet Austin, only to come face-to-face with some 2,000 of this weird world's art-tronauts assembled in the unearthly quietude of celestial Dell Hall, expectantly awaiting the world premiere of The Intergalactic Nemesis Book Two: Robot Planet Rising, the space-spanning sequel to the universe-ally popular Book One: Target Earth! Would the sci-fi spoof's follow-up be as enthusiastically embraced by the hyper-psyched multitude as its predecessor? Or would it be annihilated by an overwhelming onslaught of catcalls and jeers??!

It was the enthusiastic embrace. In fact, the current iteration of the long-lived theatrical hit – first produced by Salvage Vanguard Theater in the summer of 1996 in the late, lamented Downtown coffee shop Little City – has been getting the enthusiastic embrace from pretty much everybody since Jason Neulander reinvented the show as a live-action comic book with Tim Doyle's artwork projected over the heads of its performers. That was in 2010, and over the past three years, The Intergalactic Nemesis has gotten the love hug from audiences in Austin at the Alamo Drafthouse, the Long Center, Fantastic Fest, and Staple!; the Wall Street Journal, All Things Considered, and the aforementioned Conan O'Brien (who actually performed part of the show with Neulander and cast members); and theatres and festivals from coast to coast, which has led to fans across the length and breadth of the U.S. Indeed, Nemesis has been so enthusiastically embraced that it has three dozen gigs scheduled over the next 10 months, including five stops in Canada; three in Hawaii (in January – oh, the humanity!); four nights at the Kennedy Center for the Performing Arts in Washington, D.C.; a week at the Imaginate Festival in Edinburgh, Scotland; and two weeks at New York City's New Victory Theatre, which means that the Nemesis will have officially landed on that heavenly body all theatre artists dream of visiting: Broadway!

All this means that The Intergalactic Nemesis will spend precious little time in Austin's orbit in the coming months. With that in mind, it's launching the upcoming tour with a double-blast of space-opera goodness for the hometown crowd: a performance of Target Earth in the afternoon and a performance of Robot Planet Rising at night, all in the old-school theatrical splendor of the Paramount Theatre. The fun happens this Saturday, Aug. 18, with Book One at 3pm and Book Two at 7:30pm. And if you want the full Intergalactic Experience, you can see both, have dinner with the cast between shows at Hickory Street Grill, and receive a commemorative poster. (Call 692-0532 for this deal.) Seems like a fine way to send this show off on the next leg of its fantastic voyage. For more information, visit www.austintheatre.org.

Days of Future Past
The history of Salvage Vanguard Theater's unlikely sci-fi success, 'The Intergalactic Nemesis'