'The Art of Listening'

In her new book, choreographer Darla Johnson shares her secrets for making dance

By the time I had started collaborating with Darla Johnson, she had already been a member of New Movement Theater, Options to Opera, Big State Productions, and Migration Performance Group. These ensembles included such future notables as Academy Award nominee John Hawkes (then known as John Perkins), Academy Award winner Marcia Gay Harden, Tim Mateer (Greater Tuna), John Hagen (Lyle Lovett's Large Band), and playwright/actress Amparo Garcia (the Living Room storytelling series). Johnson was a fiery dance maker, determined to incorporate improvisation into the making of great art. And that she did.

In 1990, she and I embarked on a 15-year adventure with Johnson/Long Dance Company. It was a mix of dance and theatre with improvisation creatively at its core. As our company grew and came into national prominence, Johnson was simultaneously building a unique dance program rooted in improvisation at Austin Community College. That approach was extremely unusual for the time, as many college dance programs were still anchored to the de facto traditional techniques of greats like Martha Graham, José Limón, and Erick Hawkins. Not only were those techniques limiting for a creative culture rounding the 21st century, they were also a barrier to entry.

Dance is an inalienable possibility, and the freedom to move unfettered is imperative. Improvisation is the art of letting go of outcomes and instead letting the body's wisdom guide you. It's a creative process that is universally available, and Johnson made it the foundation of her reinvention of ACC's dance department. Along the way, she spearheaded the creation of a new studio, co-designed the Associate of Arts in Dance degree, and created an environment in which her students could thrive. Johnson is a revered and beloved teacher. The fact that she has received the ACC Teaching Excellence Award not once, but twice, is a testament to her talents in this field.

Now, Johnson has poured all her wisdom into a book: The Art of Listening. It is a poetic guide to learning how to move freely and create dance. Johnson brings the reader along with clear and direct teachings fresh from the studio, laying out a pathway to creative self-discovery, from deep listening to actualization. (It also features short breakout sections from her colleagues and former students. Full disclosure: I contributed one.)

This Saturday, Aug. 18, 4pm, Johnson celebrates the release of this inspirational, practical guide with a reading and booksigning at BookPeople, 603 Lamar. The event will also include three short dances by her current students at ACC. For more information, call 472-5050 or visit www.bookpeople.com. 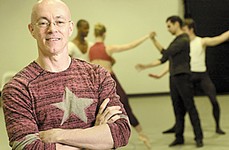 ACC Dance Department: The joys of discovery
ACC's dance program is noteworthy for its strong faculty and the way they help young choreographers find their voice