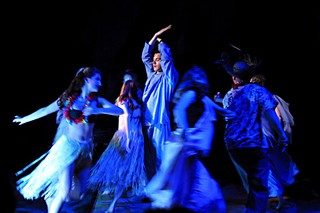 This time the dream's on me: Mark Stewart (center) and the cast of the 2002 production of Seven Wonders of the World (Plus One) (Photo courtesy of Kenny Gall)

Some shows linger in the memory not for the emotional charge they leveled at you or the eye-popping, jaw-dropping spectacle they achieved but because of their peculiarity – a word I use as much for its meaning of distinctiveness as oddness. There are some shows that just aren't like any others.

One of those was a little offering from Tongue and Groove Theatre (which has, over the past 17 seasons, perhaps mounted more than its share of peculiar productions) titled Seven Wonders of the World (Plus One). Adapted from a 1940s LP by songwriter/music producer Robert Scherman (the gent credited with discovering Nat King Cole), this "romantic musical adventure" followed George, a modern-day American, as he hit the road to dreamland, first visiting sites in the ancient world (Egypt, Persia, Greece), then suddenly shifting gears to hit mid-century Manhattan, New Orleans, the Grand Canyon, San Francisco, and Hawaii. As I noted in my 2002 review, the show races along, "what narrative there is providing little in the way of transition; we just bounce from then to now, temple to skyscraper, classical drama to screwball romance." Director David Yeakle had a ball with it, however, playing up the goofy nature of the scenic lurches by having his cast dash on and off stage in a frantic attempt to keep up with the original recording's capricious changes of locale. George, though, just drifted along, sweetly oblivious to the theatrical hubbub around him. He remained a dreamer, and the show was itself rather dreamy: colorful, comical, illogical, endearing. The Austin Critics Table honored the show with that year's award for "Most Unique Theatrical Experience."

Ten years later, Yeakle has chosen to revive Wonders at the Long Center, with new performers, new sets by Wendy Mitchell, new costumes by Pam Friday, and new illumination by Jason Amato – but Mark Stewart will reprise his performance as George. Care to join him on the road to dreamland?

READ MORE
More Seven Wonders of the World (Plus One) 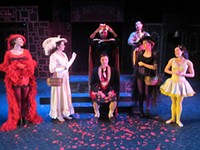