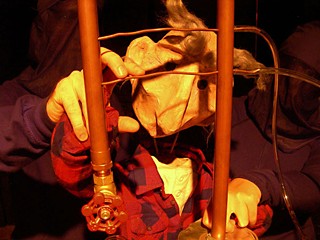 
To read the publicity for FupDuck, the current production from Glass Half Full Theatre, one might reasonably expect an evening full of vulgarity and insult. Not so much, in fact. The company is right to warn audiences that this is a puppet show "for adults and also children who already know the F-word," but it's not so scandalous as all that. Actually, it's a sweet show that celebrates things like resilience and a love of family. One would be hard-pressed to stick it with an R-rating.

FupDuck is an adaptation of the novella Fup by Jim Dodge, about a curious family made up of a moonshine-brewing grandfather, his gentle-hearted grandson Tiny, and their 20-pound duck. One day, Tiny stumbles across a wild boar torturing a baby duck. He rescues the duck, who becomes part of the family, a stubborn and idiosyncratic bird. Lockjaw, the wild boar, continues his aggression, eventually forcing a revealing showdown.

It's not a play that finishes with a clear-cut meaning and resolution. It's more a suggestion of what might be. And, for all the suggestions of obscenities (as well as a few actual ones), in the end it's a gentle and uplifting sort of play, one that sends its audiences away with something thoughtful.

The show is backed by members of the White Ghost Shivers, who play fun and sometimes hilarious Americana music and provide the occasional sound effect. The band does a great job, and unlike some shows one might see in which there's a live band over on one side and a play on the other, their contribution feels like a natural element of the larger evening. That's a thing that Glass Half Full and the rest of the Austin puppetry crowd tend to do really well: More than just produce plays, they seem to curate them. Under the direction of Caroline Reck, FupDuck is a puppet show with a lot of other stuff going on too, but it comes together in a way that is ultimately cohesive and interesting.

The show's design is good, especially the costumes from Lucie Cunningham, who dresses not just live performers but also puppeteers, finding a way to make their unavoidable physical presence blend in with, rather than overshadow, the puppets themselves. Glass Half Full Theatre has taken a little-known but worthwhile story and created from it a pleasant evening's entertainment.