I recently received a box of gifts from my grandparents, who were paring down their possessions. They generously included many fine items from over six decades of marriage. (Stick with me – I'm going somewhere with this.) Also included in the box were several packages of lace doilies made out of paper.

There's nothing wrong with the paper doilies, per se. If you work hard enough, you could probably find a way to make them look all right. It's even possible that an imaginative crafter could find a cool purpose for them. At the end of the day, however, they're paper doilies. You can't set your expectations too terribly high.

That's Xanadu, in a nutshell. The ridiculous musical from Zach Theatre is not bad at all. It's about a Muse (Jill Blackwood) who descends from Olympus and scoots around on roller skates for the purpose of inspiring one Sonny Malone (Matthew Redden) into launching a new roller disco. They fall in love. (Yes, it's the same Xanadu as the 1980 movie with Olivia Newton-John.) Nice performances, good singing, and an enthusiastic presentation: Xanadu is just fine. Even better, the musical features a few local actors making their debuts at Zach, and it's always fun to see actors turn in a good performance when they move to relatively bigger stages for the first time in Austin.

Xanadu is, however, a giant paper doily. Plenty of people love paper doilies, and more power to 'em. As paper doilies go, this is a great one. You just can't go in expecting a handcrafted, heirloom linen tablecloth.

Metaphors with chintzy household decorations aside, Xanadu also features fun costumes (designed by Susan Branch Towne), although it does not feature as much roller skating as you might expect. What skating there is is fun, and who knew that, among her many other talents showcased on Austin stages for years now, Jill Blackwood also has very nice dexterity on skates? Some of the choreography from guest director Nick Demos is a touch lackluster, but overall the production is enthusiastically exuberant.

At intermission on the evening I attended, two little girls in different parts of the audience started dancing in the same style as Xanadu: lots of energetic arm movements and nonsexual hip waggles. Not everyone who goes to see Zach's production will be willing to display their delight with such abandon, but inside, admit it: All of them want to. Even the ones who think doilies are kind of silly. 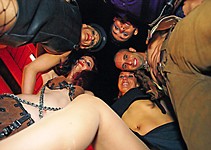 After a Fashion
Star light, star bright: Ross Bennet could be our 'Fashion Star'! Gay Place
Take your typewriter, pencil, or pen, and if you make a mistake, you gotta do it again!