Dance of the Century 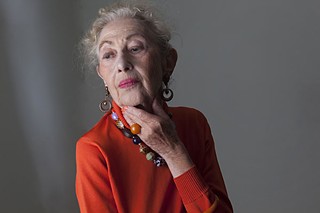 In the footsteps of legends: Rhoda Winter Russell (Photo by Jana Birchum)

"Rrho-DA" is how Rhoda Winter Russell remembers Mary Wigman addressing her, rolling the "r" and lowering the pitch to emphasize the final syllable. "Rrho-DA."

It was 60 years ago when Russell, now 82, flew to Europe to take a summer course with Wigman, the German expressionist dancer and choreographer who was one of the mothers of 20th century modern dance. Russell, having just earned her bachelor's degree from the Department of Women's Physical Education and Dance at the University of Wisconsin-Madison, was impressionable but confident, and Wigman (1886–1973) had a profound influence on her. "Mary liked me," says Russell, and they kept in touch. She's just relinquished her collection of Wigman letters, photographs, and programs to the Harry Ransom Center, less a few pieces with personal significance. One such is a sepia-toned photo of Wigman, its curled edges framing her severe, almost cubist cheekbones and planetary eyes.

A decade after the Wigman course, Russell left the dance world to launch a distinguished career in movement therapy, but her memory is a jewel box, a dance historian's dream. In her 20s, she was precocious and gregarious, and her stories, studded with the famous (and infamous) dancers, teachers, choreographers, musicians, composers, and designers she crossed paths with, could make quite a page-turner. "There I was!" she marvels on more than one occasion, in awe of her own history. But Wigman's ideas were her golden apple, those ideas that opened doors of innovation for her and for many with whom she worked and admired. "There's Picasso in art, and there's Stravinsky in music, and there is Wigman in dance," says Russell. "And that's it. I don't want to hear about Martha Graham." Others, in fact, have paralleled Graham with Picasso and Stravinsky, but where Graham popularized modern concert dance as something as rigorous and high-drama as ballet, Wigman viewed modern dance as useful, experiential, holistic, individually expressive. When Wigman instructed her class, Russell remembers, "It was a lot of emotional feeling, not that you should bend this way and turn that way. And let the group feel each other, and create out of that. Basically you had to get out of yourself, and you had to sense not only your body but the others." That kind of kinesthetic concern is part of what Russell sees as "the Wigman connection," the forces and ideas that link her seemingly disparate experiences.

Russell's post-Depression, middle-class upbringing in Philadelphia poised her to soak up the ideas she would later encounter with a creative, compassionate, autonomous point of view. As a schoolgirl, she memorized the paintings in the art museum, watched foreign films at the public library, and saw countless plays and ballets with her mother from $2 seats. "I had one sweater and one skirt when I was in school. We did not have money. But these things were available! When I was in elementary school, we could go to the Academy of Music for a special children's performance and hear [Leopold] Stokowski conduct the Philadelphia Orchestra. We sat up at the top, but at the Academy of Music, the acoustics were just as good up at the top – that's why it was so wonderful."

Then there were the dance classes. As a girl, Russell studied with a former premier danseur of the renowned Littlefield Ballet – the first U.S. ballet company to tour Europe – as well as Marion Cuyjet, famous for her dance school that welcomed students of color. "A lot of people studied with her and didn't give her credit," Russell says of Cuyjet. (One person who did, however, is former Alvin Ailey star Judith Jamison.) In Cuyjet's class, in the 1940s, Russell was often the only white student. "I was studying dance," she shrugs. "It didn't matter to me at all." Later, as a teenager, Russell and her mother took the train into New York City on Saturdays so she could study with Syvilla Fort, who had danced with "queen mother of black dance" Katherine Dunham: "Every big-time, small-time black dancer studied with Syvilla." In New York, Russell also took classes at Ballet Arts. In the summers, she and her mother would stay in the city for a month at a time, so Russell could take classes and they could attend the theatre. It was because her mother would "yak it up" with the woman who ran the studio that Russell was allowed to stand in the back of a class given by Antony Tudor, the English ballet choreographer. "It was very scary – I wasn't that good. Agnes de Mille was in the class," she laughs. "She was terrible!"

Like de Mille, Russell wasn't cut out to be a ballerina, but she didn't want to be a chorus girl in a musical, either. Grappling with the question of how to continue dancing while getting a college education, she called Mary Hinkson, a family acquaintance known as "Bunny" who went on to become one of Graham's few African-American dancers (one of Hinkson's performances proved to the young Virginia Johnson, now director of the Dance Theatre of Harlem, that women of color could dance onstage). Hinkson encouraged Russell to apply to the University of Wisconsin program, one of the few college dance programs at that time. It was headed by movement scholar Margaret H'Doubler, whose connections between kinesthetic awareness and emotional well-being were akin to Wigman's, and whose ideas spawned the current multitude of dance departments across the country. After graduation, Russell took the Wigman course in Berlin, and from there took a train to Switzerland to study with influential choreographers Rosalia Chladek, Kurt Jooss, and Harald Kreutzberg (all of whom had fled Germany during World War II). After returning to Madison to get her master's degree, and teaching a few semesters of Wigman-inspired classes at Ohio Wesleyan University, Russell headed to New York. Hanya Holm, whom Wigman had enlisted to open an American school in her style, hired Russell to teach children's classes, and Russell took classes with other teachers at the school. (Holm, who was in the midst of rehearsing Broadway dancers in her choreography for My Fair Lady, taught only occasionally.)

It was there that Russell heard about choreographer Alwin Nikolais, a Connecticut native who ran a dance company out of the Henry Street Playhouse on the Lower East Side. By the 1970s, Nikolais was world-renowned for his use of lighting, color, design, synthesized sound, and dance to create abstract spectacles – "He was a whole auteur," says Russell. But in the mid-1950s, his small company of dancers took an evening class alongside "regular people" with day jobs. With the class on the stage, Nik, as he was called, sat in the first rows of the 350-seat theatre with a drum or two – like Wigman, he often used percussion to accompany his classes. When she first joined the class, Russell hid in back: "I had no idea of the way he wanted you to move. It was very different, very organic. No fancy schmancy stuff. It was the extreme opposite of Martha Graham, which delighted me, because I couldn't stand anything she did."

At the 1956 Connecticut College School of Dance summer program (a predecessor of today's American Dance Festival), Russell assisted teacher Margret Dietz, another Wigman protégée, and Nikolais' company was invited to perform. Russell fondly recalls the ovation following Kaleidoscope, his first show for a national audience: "I was in the audience, with Nik. It was tremendous. People had not seen them, and here was his full company on this big stage, and the roof came down. People stood up and cheered – I get emotional now thinking about it. It was fantastic, because you see, until that time there was Graham technique, and all these damn people who had been around, but nobody went down to see Nik. And he was the biggest thing to hit that summer at Connecticut College. He said afterward, it was like a cold waterfall, an ice-cold waterfall falling over him as he heard this applause."

Wigman visited New York in 1958, and Russell escorted her around the city, first to watch a Graham class at Juilliard and then to meet Nikolais. "Nik and she fell into each other's arms – you know, to Nik, this was this goddess – and they had a wonderful time. She sat and watched as they did a typical class, and I think I sat with her – I'm sure I didn't get into that class!" Afterward, Russell recalls, Wigman summed up their day: "She said, 'Graham is autocracy, and Nik is democracy.' She was very sharp and had a sense of humor."

While continuing to take classes with Nikolais, and stage managing Ruth Grauert's children's productions for the Playhouse, Russell entered the barely existent field of movement therapy. She had no formal training in counseling or psychology, although her interest was no doubt piqued in part by her relationship with the psychologist Albert Ellis (he developed rational emotive behavior therapy), whom she married in 1956. Perhaps more importantly, she had intuition and capability for empathy, along with the fruits of her college education: Her undergraduate and graduate theses were on dance as a reflection of social change and choreography based on feeling. Russell says that in H'Doubler's program the student's purpose wasn't to become a professional dancer. "It was to become a more integrated, well-adjusted human being." Russell began leading movement therapy sessions at the Manhattan State Hospital, as a volunteer. "I worked with very severely disturbed patients, because in the Fifties, they were just beginning to use the psychotropic drugs," Russell explains, and points to a photo in a 1956 Life magazine article about new developments in helping the mentally ill. In the photo, Russell, barefoot, is leading a roomful of patients in a partner dance, while others sit on the sidelines, playing maracas.

Russell gave up the volunteer position in 1958, when she divorced Ellis to marry Dr. Murray Russell, a Californian urologist. But when Dr. Russell died suddenly of a heart attack, leaving her a single mother to their 3-year-old son, Harlow, Russell moved back east and began a full-time career in movement therapy at the Philadelphia State Hospital. There, and later as the director of creative arts therapies for the New Jersey state hospital system, Russell was known as someone who not only moved with the patients, but took them on outings and spoke up for them. She invited the patients to sit in a circle rather than against a wall. She convinced the hospital's business manager to order smaller Kotex for the female patients. She got rid of the dead plants.

Now in Austin, where she's lived since she retired in 1994, Russell sifts through memories as vivid and colorful as a Nikolais production, between travels to evaluate the gaits, muscles, and temperaments of showdogs. A skill she's been honing on the side since the 1980s, judging dogs is an aptitude, she says, that developed out of her lifelong concern for animals and – you guessed it – the philosophies of Mary Wigman.