All Over Creation: Two-Stepping With Lyndon

To play historical figures like LBJ and Groucho, actors ought to dance with them 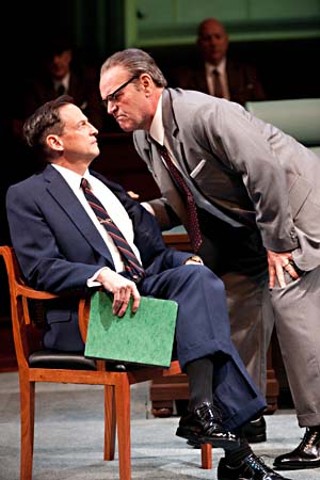 What do Lyndon Johnson and Groucho Marx have in common?

Well, not much, unless you count the fact that both men saw their careers undergo profound transformations in East Texas (Groucho in Nacogdoches, when a runaway mule stole the spotlight from him and his brothers during their musical act, inspiring him to ad-lib comic insults that got such laughs they turned to comedy; LBJ in Dallas, the particulars of which I expect you know).

This summer, though, these two different men are being rather remarkably resurrected on the stage – in the same theatre, yet – at the Oregon Shakespeare Festival. I witnessed it in Ashland, Ore., in July while there to catch the premiere of All the Way, a drama about Johnson's first year as president. I was drawn to the play in part because of the long shadow LBJ casts in Central Texas but also because of author Robert Schenkkan's Austin roots. And while I was there, I wasn't about to miss OSF's production of Animal Crackers, a stage adaptation of the Marx Brothers' 1930 film, itself adapted from a play the brothers ran on Broadway in 1928. How often do you get to see even a faux Marx onstage? 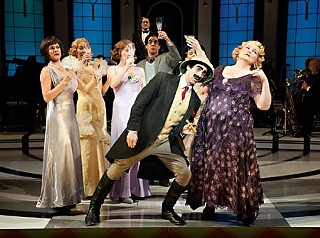 Now, historical figures in drama come burdened with more baggage than an average role, given the audience's expectation that the dramatized versions resemble the real deal as much as possible. That's daunting enough for actors playing your Thomas Mores and Mozarts and Moseses who lived before recorded sound or film, but in portraying folks from the 20th century onward, an actor might as well face Genghis Khan's Mongol hordes with a tube of Chapstick and a sock: He can't win. We're so familiar with the famous of the past century – with their looks, their voices and speech patterns, their gestures and moves – that we can spot any deviation from the originals, and the actor knows it. We want unreasonable facsimiles of these personages, and Thespis bless the actor confronting that.

The good actor, though – the one with experience, skill, and a feel for the craft – understands that there's more to making a historical figure come alive than a meticulously recreated wig or wiggle in her walk. There needs to be some animating spirit within the performer, something that we recognize as, for lack of a better term, the soul of this Great Person – the inner spark that ignites all the qualities and mannerisms we know so well. Without it, the most artful replication of some luminary's look, drawl, stammer, slouch, gait, or giggle may seem mere mimicry, as impressive technically and as hollow as a chief executive in Disney's Hall of Presidents. With it, that personality we know intimately can rise convincingly before us despite an impersonation that isn't pitch-perfect.

Jack Willis doesn't have Lyndon Johnson's face. Where LBJ's was oval, his is square. Where LBJ's nose was long and bulbous, his is short and broad. He lacks Lyndon's basset-hound jowls, hooded eyes, thin lips, and road-map creases across his brow. What he has, though, is an inner fire that feels true to the president, and it propels him across the stage throughout All the Way, every part of him restlessly in motion – hands sliding in and out of pockets, hitching up pants, pulling off glasses, scratching his ear, wiping his nose. But these aren't just tics to give the character personality; they're evidence of Johnson's internal agitation and drive, the master dealmaker working out his next move, the man in power exerting his authority. That's what you sense as he towers over others, sets his nose an inch from theirs, browbeats, bullies, bellows, boasts, bleats. It's a masterful portrait of Johnson that strikes a chord of truth because of what Willis puts inside it.

Mark Bedard may not have Groucho's face, either, but once you paint on the shoe-polish 'stache and brows, who's to know? They create the comedian's iconic visage. But in portraying Groucho, you can't coast on that look any more than you can a cigar, crouch, or bogus Joysey accent – and Bedard doesn't. He begins with Groucho's trickster spirit, the mocking, subversive, impulsive nature that drove him to upend every society gala, disparage women as he wooed them, bite whatever hand fed him. When Bedard duckwalks onstage as Groucho (as Captain Spaulding), what matters is the mischief in the man. He gets that, and all the Marxisms – the quips, cracks, rolled eyes, sailor's jig, etc. – flow freely from there. The zany business comes from him so naturally (and also, it must be said, from Brent Hinkley's Harpo and Daisuke Tsuji's Chico) that it feels less like a re-creation of something historic and more a spontaneous, joyful game mirroring one played before.

That double image of historic and dramatic may best describe how these impressive, compelling, delightful performances work. It's the actor matching the movement of his real-life inspiration to the distinctive rhythm and music he heard: Bedard waltzing with Groucho, Willis two-stepping with Lyndon. And these actors were so exceptional at it that, to me, they could have danced all night.