Hidden Room Theatre leads us forward into the past 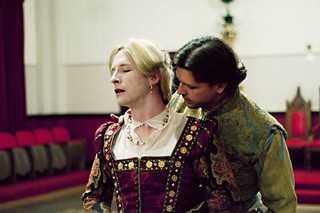 On the one hand, Beth Burns is all about the Past. Most of the theatrical work that this Los Angeles transplant has directed locally has come from the classical canon, and with her company the Hidden Room, Burns introduced Austin to Shakespeare staged in Original Practices – that is, the way the plays were presented in the author's day, with period costumes, props, music, lighting, dance, and casts composed entirely of men.

On the other, Burns has a firm grip on the Future. Hidden Room pushed the theatrical envelope with its original transatlantic rom-com, You Wouldn't Know Her, She Lives in London, co-produced with the English company Look Left Look Right, in which actors and audiences on two continents interacted and experienced a performance in real time via Skype and live web connections.

With Hidden Room's new production, Rose Rage, opening this Thursday, Burns brings Past and Future together in the Present. Like her award-winning 2010 staging of Taming of the Shrew, this is Original Practices Shakespeare, and more early dramaturgy by that "upstart crow," to boot – in this case, his much-maligned and little-seen trilogy about King Henry VI and the English civil war begat during his reign. Only instead of the three sprawling dramas that Will himself penned, this 2002 distillation by Edward Hall and Roger Warren of the British theatre company Propeller is a rock 'em-sock 'em pair of histories in which the houses of Lancaster and York play tug-of-war with their scepter'd isle. And unlike Propeller's own version, set in a latter-day slaughterhouse (complete with bloody cuts of meat), Hidden Room will preserve the period setting, with Elizabethan music and dress provided by the Baron's Men and an all-male cast. But since that cast includes a trio of gents from the playwright's homeland, Burns conducted some of the early rehearsals with actors here and there, using Skype to allow all of the actors to work together in real time. Through webcams, the cast members not in Austin were able to speak on cue and could still see the space in which their castmates moved, familiarizing themselves with it so that when they did arrive in town they had a sense of where to move. Thus, the technology of tomorrow facilitates Burns' vision of an authentic yesterday.

As Rose Rage runs more than four hours in its entirety, Hidden Room will be offering Parts 1 and 2 separately on weeknights and together on weekends. The Saturday and Sunday performances include a 75-minute break between parts, with an Elizabethan dinner devised for the show by Megan Turbeville, executive chef at the Root Cellar. That may not settle the violent Wars of the Roses waged on England's green fields, but at least it should calm any fierce hunger raging in your belly. 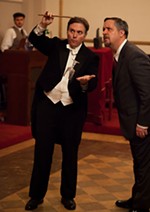 Hidden Room Theatre's Houdini Speaks to the Living
In this drama featuring Harry Houdini and Arthur Conan Doyle, a debate on the talking dead springs to dramatic life