When maestro Peter Bay was truly conducting, electricity charged this dance he inspired


Solo Symphony, a music and movement work for Austin Symphony maestro Peter Bay by Forklift Danceworks Artistic Director Allison Orr, proved an important thing about music and dance: Symbiosis is everything. When Bay was really conducting the 13-member chamber ensemble onstage – in direct conversation with the individual musicians and the orchestral whole – he was vibrant, witty, and enthralling. When he was performing the movement sequences that Orr developed from some of Bay's conducting gestures, he was still charming and interesting, but you could tell the difference.

Following an introduction by composer Graham Reynolds' atmospheric piano, which said very clearly, "Here comes something special – pay attention," the lights went up on a flipped orchestra: Bay faced the audience before the musicians, whose backs were to us. No one comes closer to playing god than an orchestra conductor, and Bay's governance was a benevolent, amiable one. He often evinced a sly, knowing smile as he drew out a phrase; other times, he did a quick sideways bend, jerking his elbow as if delivering the punch line of a joke.

Between Bay's conducting and some candid, autobiographical audio clips, he moved and listened. Some of the choreographed gestures, performed in silence and to Reynolds' sound design, were memorable, especially as lit by Stephen Pruitt. Palms turned outward before him, Bay seemed to hold the surface of a large globe, and he twisted one hand held out from the waist like a sword in an enemy's gut. A simple pointing upward was reminiscent of "I swear" in ballet mime. But in sections where Bay's hand chopped the air, bladelike, Reynolds' loud, electronic drum – perhaps meant to evoke empathy with the tormented audience of that notorious first performance of Stravinsky's Rite of Spring – manhandled the show's dynamic.

After a final audio clip in which Bay described, in simple but passionate terms, his sheer love of music, he conducted an orchestral arrangement of Bach's lilting "Sheep May Safely Graze." After a few minutes, he stepped down from the podium for the first time. Hands clasped, smiling, he rocked to the gentle music and meandered through the orchestra, admiring the musicians, immersing himself in their sound. He emerged upstage, back-to-back with the players, and began his conducting movements again, facing the audience. His countenance remained kind, but his exuberance had gone. Unlike the musicians who usually sit before him, we, the audience, only sat in silence, and I was overcome by a terrible sense of failure; no matter how earnestly he sought to draw out sound, we were at a loss to make his music play. While I heard sniffles in the audience throughout the piece, the ending was what brought a lump to my own throat. 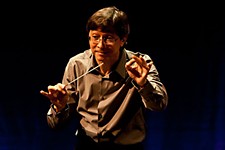 All Over Creation: Surprise, Surprise
Peter Bay's work in 'Solo Symphony' revealed sides of him that hadn't been seen before