Big move for the little gallery 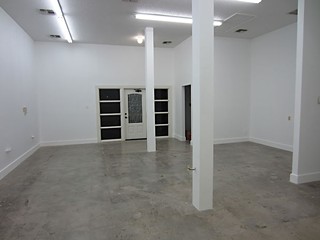 The name suggests something minuscule – which, as a contemporary arts exhibition space, it was – but Tiny Park was a big success story of the past year. Co-curators Brian Willey and Thao Votang opened the small gallery in their North Loop neighborhood home last September – running an arts space was a dream the two shared, and they figured doing it out of their house was a cheap way to realize it and get a feel for what such an enterprise takes – and almost immediately Tiny Park began receiving the kind of serious buzz that typically takes a brand-new venue much longer to generate.

Of course, it helped that Votang and Willey had strong backgrounds for the job: She has a degree in art history from the University of Texas; he has a master's from the School of the Art Institute of Chicago and work experience in commercial galleries in Los Angeles, Chicago, and Boston. But more important to the rapid rise of the gallery has been their choice of artists to show: a mix of local rising stars and powerhouses such as Miguel Aragon, PJ Raval, Michael Sieben, and Leah Haney, as well as out-of-towners from Chicago (The Sea and Cake's Sam Prekop, Deborah Stratman), Los Angeles (Nick Brown), and New York City (Stephanie Serpick, Rob Lomblad).

Now, after just four shows in nine months, the pair is ready to expand their venture into a commercial space. This weekend, the new and bigger Tiny Park – a good 800 square feet with 12-foot ceilings – opens at 1101 Navasota, in the neighborhood shared by Longbranch Inn, Hillside Farmacy, East End Wines, East Side Pies, Hill Country Pierogi, Blue Dahlia, and Switched On. The inaugural exhibit, titled "Greatest Hits," pokes fun at the gallery's brief existence by re-viewing all the artists – and even some of the works – shown in the original Tiny Park. And since Willey and Votang plan to show some of these folks again in the new gallery, their introduction here also functions as a glimpse of what's to come. In addition to art exhibitions, look for film screenings, literature readings, and listening parties. In a move to a new space, Tiny Park is graduating from gallery space to cultural center.