With this clever comedy, Capital T treats us to a kinder, gentler doomsday 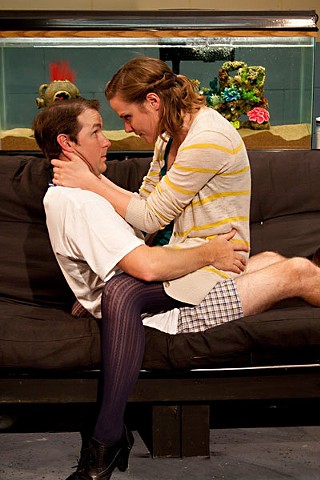 Waitin' for the end of the world: Brad Price and Katy Taylor


We just can't seem to shake that Apocalypse Fever.

As with other cultural afflictions of the early 21st century (cf. Zombie Pneumonia, Young Adult Dystopian Future Flu), our febrile fixation on doomsday's imminence has been hanging around long enough to qualify as a chronic condition. And judging by the output at the cineplex (Melancholia, 4:44 Last Day on Earth, Seeking a Friend for the End of the World), we're experiencing another flare-up. Indeed, this one's spread to local stages, as evidenced by Loaded Gun Theory's Our Apocalyptic Dream, playing June 15-July 7, and Capital T Theatre's current boom.

In the latter, playwright Peter Sinn Nachtreib drops us into an underground lab where a man and a woman have managed to survive a catcalysm that's wiped out every other human on Earth. But the duo's odds for staying alive and repopulating the planet look mighty slim. For while forward-thinking Jules has done a tip-top job of stocking their refuge with edibles, Jim Beam, and Pampers, he and fellow survivor Jo aren't terribly compatible: in temperament or, more importantly, in sexual proclivity – a catastrophic kink in any plans to become the next Adam and Eve. So what should be a joint fight for life ends up more a cage match to the death, albeit a comically inept one, especially with the smart staging by Capital T Artistic Director Mark Pickell. Marine biologist Jules, as played by Brad Price, is as much a cold fish as the creatures he studies; he's easily startled and prone to bolt when touched. Journalism student Jo is more aggressive – Katy Taylor growls, stalks, and pounces like a tigress – but her tendency to faint dead away at key moments short-circuits the possibility for true mayhem. They're a match made in Craigslist hell.

And yet their story ends happily, or so we're told by Barbara, whose nametag and sleek black uniform seemingly beamed down from the starship Voyager's laundry mark her as a docent for the museum exhibit before us. Turns out we're actually watching a sort of animatronic re-creation of Jules and Jo's history. Excitedly jerking levers like Oz's wizard behind the curtain and pounding timpani in the play's more dramatic moments, the chipper Barbara orchestrates their story, interrupting it periodically to tell us how much she loves it – so much so that when the museum decides to shut the exhibit down, she insists she'll open her own museum to keep its story alive.

This resolute Barbara, embodied by Katherine Catmull with disarming ardor and exquisite comic timing, cues us to what makes boom more than just another apoca-typical drama. She is, like the Jules and Jo she so admires, choosing to continue. Unlike most end-of-the-world auteurs, Nachtrieb is less focused on the hows of survival than the whys, on our biological imperative to carry on, even when faced with a disaster that destroys all we hold dear, even when all appears lost. We can't go on; we must go on. That notion sets boom closer to Beckett than von Trier or Bruckheimer, though with a seed of hope Didi and Gogo never knew. Boom treats us to a kinder, gentler doomsday. 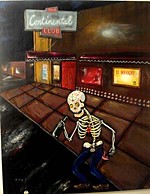