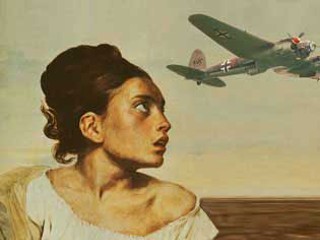 So east is east and west is west, and never the twain shall meet, huh?

Don't tell that to Big Medium. The local visual arts nonprofit that gave us the East Austin Studio Tour is finally making those compass points connect this weekend with a companion tour on the sunset side of the interstate. After nine years of running the art open house better known as EAST, Big Medium is launching the first West Austin Studio Tour, aka WEST. On Saturday and Sunday, May 19 and 20, from 11am-6pm, artists from Stassney to Steck will open their studios to all comers. More than 200 artists will be represented in 162 spaces – not only studios but also museums, galleries, shops, bookstores, libraries, schools, churches, and even City Hall.

As with EAST, the first question is: How do you tackle an event that encompasses so many stops over such a broad geographic expanse? You might as well start with the nerve center for all this activity: the WEST info hub Downtown. With assistance from the businesses in the 2nd Street District, the Big Medium crew secured temporary digs at 241 W. Third (between Cathy's Cleaners and Royal Blue Grocery) and filled it with works by more than 150 artists taking part in the inaugural WEST. A survey of that group show might give you some clues as to whose work you'd like to see more of, and you can also grab a catalog (while they last) with the full 411 on who's showing where and how to get there. (Another reason for hitting the hub: If you drop by at the right time on Saturday or Sunday afternoon, you can have a favorite photo transformed into original art via Aron Taylor and his Quick Draw Photo Booth.)

From "Friday Night at House Park" by Bob Wynn

Another strategy is to see WEST in chunks. The tour can be pretty easily separated into three layers – like Neapolitan ice cream. South of Lady Bird Lake is your chocolate: an eclectic mix of mostly studios, about half of them clustered in the Travis Heights and Bouldin Creek neighborhoods, plus a few familiar exhibition spaces, such as grayDuck Gallery, Yard Dog, and the Umlauf Sculpture Garden & Museum. Downtown and Clarksville are your vanilla, consisting primarily of established galleries (Wally Workman, Davis, Art on 5th, Women & Their Work, La Peña, Austin Art Connections, Austin Details Art + Photo) and assorted exhibition spaces (the People's Gallery at Austin City Hall, Mexic-Arte Museum, Faulk Central Library, the University of Texas School of Architecture, University Baptist Church, and the brand-new Co-Lab Projects space). And everything north of UT is strawberry, with roughly half of the 64 spaces below Koenig Lane/Allandale and half above. Each neighborhood averages about six spaces, with studios dominating – and a good number of them showing clay, ceramics, glass, and jewelry. Exhibition spaces include AMOA-Arthouse at Laguna Gloria, Gallery Black Lagoon, Austin Art Space Gallery, Tiny Park, Guzu Gallery, Access Gallery, the Griffin School, Diamond Way Buddhist Center Austin, and the North Village and Yarborough branch libraries. A quick look at the tour map – which can be found on the WEST website, www.westaustinstudiotour.com – can show you which areas have tour sites clustered close enough together that you can visit multiple artists on one stop.

You can also find multiple artists showing together at several spaces, which will make you feel like you've sampled a wealth of art without wearing out the shoe leather. You won't find many venues that cover as much artistic territory as the aforementioned WEST hub group show, but one that does is the People's Gallery at City Hall, the annual exhibition of work by local artists displayed throughout the seat of our municipal government. This year's show includes work from more than 150 artists, including the late Damian Priour, as well as a reprise of The Mona Lisa Project, photographer Rino Pizzi's riff on Leonardo's enigmatic portrait created in collaboration with 16 female artists. Indeed, WEST will have its official kickoff at the People's Gallery on Friday, May 18, 6-8pm, with a reception hosted by the City of Austin Cultural Arts Division. At 6:30pm, five of the featured artists will give presentations on their work in the council chambers.

As for a few of the pages I've already dog-eared in my WEST catalog:

• 1011 Milam Place: The studio shared by Deborah Lykins and Ben Appl showcases her charming black-and-white photographic portraits of trick-or-treaters at Halloween and his colorful circuit sculptures, which look like a bit like electronic infestations on walls.

• N Space, 905 Congress: Part of the offices of architecture firm Nelsen Partners is being converted into exhibition space that will be curated by Sean Gaulager's Co-Lab Projects. First up is "Row Home" by multimedia artist Mark Johnson.

The catalogs produced for the East Austin Studio Tour are invaluable: packing locations, addresses, maps, artists' statements, and representative images of the artists' work in a gorgeous, glossy, stylishly designed package. The catalog for the first WEST is no different, so if you're intent on taking the tour, your first priority is to snag one one of these beauties. As of press time, free catalogs were still available at the locations listed, but be advised, they're snapped up quickly, and some of these venues may be out of stock by the time you arrive. – R.F.

All branches of the Austin Public Library: 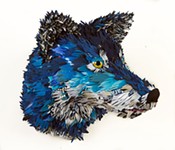 Enjoying and Making Art at the 2019 West Austin Studio Tour
Artists are offering demos, workshops, and experiences to get you in on the creative action 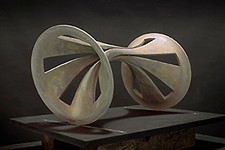