The comic crowned king this year had the Nazer's edge 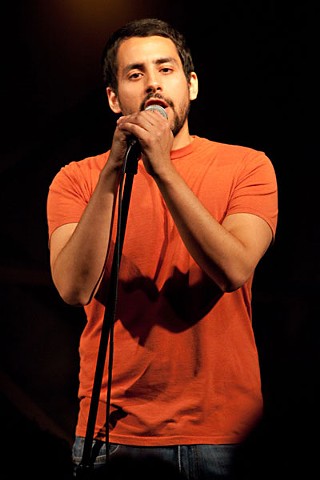 You could not have envied Ramin Nazer being dealt the last slot in the finals for the 27th annual Funniest Person in Austin contest. After all, the later you take the mic in a field of a dozen comics, the more likely the crowd is to be laughed out. And with this year's stand-up showdown fielding arguably the strongest lineup of savvy, polished jokesmiths yet, one thing about that night was certain: There would be laughs, and loads of 'em.

And there were. Sweet Shecky, the packed house at Cap City Comedy Club never stood a chance against these comics, skilled as they were. No comic had a less-than-solid set, and most had stellar ones – the kind where every punch line lands like a blow to the belly, forcing out guffaws. But the crowd was into it, too, its responses growing more enthusiastic with each finalist, like some gang of joke junkies seeking bigger and bigger highs. By the time No. 11, Joe Hafkey, finished his set, the audience should have been, by all rights, too tuckered to titter.

But when Nazer took the stage around 9:40pm on May 14, none of that mattered. He grabbed the mic with both hands and launched into his act with an energy and focus that demanded attention. He was a man on a mission: to give the people in that room the wildest joyride of the night. And he did, punching out one absurd but smartly crafted premise after another ("Isn't it strange that the same year you start masturbating is the same year the monsters stop showing up under your bed?") while in between them whiplashing into commentary on what he'd just said. ("That concludes the misogyny portion of my act.") The crowd had seen a number of comics delivering jokes hilariously and a few deconstructing the mechanics of stand-up and doing so with wit, but they hadn't seen anyone doing both – and getting away with it – until Nazer blew on stage. His meta comments – a part of his act for years – have gotten tighter and tighter, and the drive of his delivery helps get them across like a swift kick to the funny bone before he's on to the next "real" joke. Maybe the judges spent the 25 minutes after Nazer's set deciding on the second- and third-place winners or the joke of the night, because it seemed clear that Nazer – who placed second in the 2010 contest and third in 2011 – owned the crown this year.

To get it, though, Nazer leapfrogged over Chris Cubas, who placed second last year and held on to that spot on Monday. His set was as engaging as ever, a raucous ramble through crackhead-infested convenience stores, punked 13-year-old Harry Potter fans (He shows up outside their window and tells them he's Hagrid), and annoying Cash4Gold ads. (Gold just lying around your house? "That is a pirate problem.") The big man scored maybe his biggest laughs with his characterization of Mitt Romney as a guy who looks like he watches porn while he eats. Placing third was Carey Denise, one of only two female finalists this year and also one of only two whose face was not sporting a beard. (Is there some new rule that male comics in Austin aren't allowed to shave?) Though she traveled some pretty well-trod topics – being poor, bad sex, dates from hell – Denise kept them fresh with an appealingly skewed perspective that had bite without bitterness. (She finds the 69 position annoying, "like someone trying to talk to you while you're trying to read.") She left me eager to see her again.

Nazer's first proclamation as local king of comedy? "Now, everything I say is, by default, funny" – a statement he tested by blowing raspberries into the mic for about a minute. Here's hoping he returns to the material that won him his FPIA title before the year is out – and preferably before the week is out. You have several opportunities in the coming seven days to catch Nazer's act for yourself: hosting Live at Coldtowne this Friday (and every Friday), 10pm, at Coldtowne Theater, 4803-B Airport; Saturday, May 19, 9:30pm, in the Austin Variety Show at Highland Mall, 6001 Airport #2021; Monday, May 21, 8pm, in Charlie Hodge's Monkeyshine Mondays at the Rattle Inn, 610 Nueces; Wednesday, May 23, 8pm, at a comedy event benefiting the daughters of Austin Police Department Officer Jaime De Luna-Padron at Cap City Comedy Club, 8120 Research. For more information on Nazer, visit www.raminnazer.com. 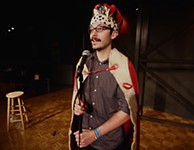