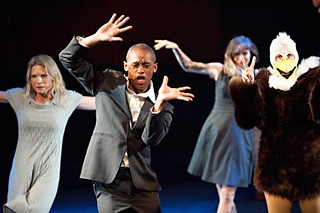 Of thee I dance: Cast members of Gloria's Cause (Photo courtesy of Erica Nix)


To kick off Fusebox 2012, choreographer Allison Orr (of Trash Project renown) recruited a slew of girls to rock out with the Coathangers on the Long Center lawn for a performance called Invasion of the New Grrl Order. The result was cute, messy, and interesting with regard to context: Doting parents wielding iPhones to capture their daughters' 15 minutes (see Fame, below) likely had a different experience than those who came for the grunge-punk and performance art. If you straddled both perspectives, the girls were sweet and alien, powerful and bratty. I was struck by how American these grrls were.

Being American was the focus of Dayna Hanson's thrilling absurdist-confessional musical pastiche Gloria's Cause, in which cherry pie was the madeleine for Proustian reflections, our avian mascot was misunderstood and horny, and founding father/falterer Washington (the towering Wade Madsen) was obstinate and inebriated. Hanson, who choreographed the Rude Mechs' I've Never Been So Happy, seen in last year's Fusebox, considered the motivations of Deborah Samson Garrett, who masqueraded as a man to fight in the Revolutionary War. Themes of metamorphosis and control were tested against the inescapable, putrid foundations of the country: slavery and colonialism. Rather than unsettling, though, Gloria's Cause was comforting as a reminder of the "maddening inequities" (from the program notes) on which we Americans can lay blame for all our troubles.

Those same inequities haunted David Zambrano's Soul Project. Part circus, part exhibit of invented natural history, part cocktail party, the piece (currently touring the U.S. following iterations in Europe) featured seven exotic dancer-characters, like curios pilfered and traded on the host's world travels. In a patterned tuxedo, Zambrano played the curator of these willing cultural ambassadors, who all had, somehow, a common musical history: soul. But each, dancing a fierce, exhausting solo in oddball tribal costume, seized the classic songs and wide-open timbres of the voices differently, suggesting a unique trajectory behind the furious movement.

An individualist aesthetic was also apparent in Fame by Lee Sher and Saar Harari, the Israeli New Yorkers who direct LeeSaar the Company, but the six women and single man (Harari) here were motivated by attention rather than passion. Nude trunks and effectively subtle tops allowed focus on the flesh and the movement, with its high kicks, suggestively open hips, and rubbery snap-back quality. To a mixed score, Fame was arresting, and when the dancers sought more of it with an encore, the audience was game.

Local choreographer Julie Nathanielsz's focus on natural rhythms in her work-in-progress What Is Common was a gentle segue back into the larger mechanism. As in last year's Austin Critics' Table Award winner Working the Line, points of view were physicalized by the extreme differences in the performers' appearances. Here, they explored twinges rather than entire gestures. How does a single phenomenon play out on different people? How far can a variation go before it is a change? Who instigates shift, and when? Artists or not, attending to these questions in our lives is valuable and interesting.