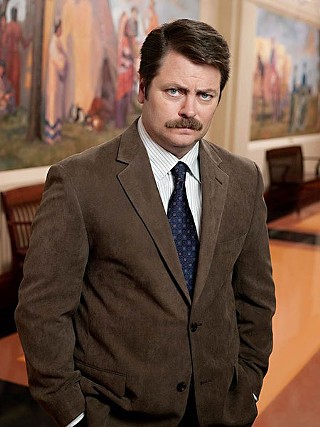 The man, the ham: Nick Offerman as Ron Swanson


Though the official title of the event was the Moontower Comedy & Oddity Festival, the oddities were fewer and farther between than the comics last weekend. Still, at least one headliner brought some variety show weirdness to the Paramount Theatre: Nick Offerman, who is apparently more than just the actor who plays the avatar of masculinity, Ron Swanson, on NBC's Parks and Recreation, though still the character's real-world inspiration.

All of which seemed to delight the crowd at the Paramount, packed as it was largely with people who have spent no small amount of time considering what level they'd achieved on the Swanson Pyramid of Greatness. Offerman – a 41-year-old who spent most of his career as a journeyman character actor in indie films with the occasional bit part in Hollywood until his Parks and Rec breakout in 2009 – is tied inexorably to the woodworking, meat-loving naturist he plays on television. And while it's never quite clear if he's basing his stage persona on the character or the character was written to be Offerman's alter ego, it's definitely clear that Offerman knows that any crowd he attracts for his stage show (which usually tours college campuses) is really seeking an audience with the cult icon Swanson. And he gives them what they want.

His one-man show, American Ham, offers "10 Tips For Prosperity," wherein Offerman uses the format to alternately offer genuine advice ("say 'please' and 'thank you'," "carry a hanky"); to comment on our weird modern world ("develop a hobby," "avoid the mirror"); to tell funny personal anecdotes ("engage in romantic love," "have a relationship with Jesus Christ, if it gets you laid," "use intoxicants"); and to offer Swanson-ian throwaways ("eat red meat," "go outside; remain," "paddle your own canoe"). He intersperses this with decidedly surreal songs, most of which he wrote for his wife, Megan Mullally (also of Parks and Rec).

Mullally was at the Paramount for the show as well, opening the evening as part of a surprisingly straightlaced folk music act (that also featured Friday Night Lights' Stephanie Hunt on harmony vocals) and then again to accompany Offerman on songs at his set's conclusion. But she was also the beating heart of Offerman's set as he continually glanced offstage to catch her eye, gushed about his relationship, giggled when talking about how she'd look in a yarn dress (an affectation the crowd ate up), and generally showed a warmth that his character on TV lacks. While the whole evening was very much a tribute to Offerman's role on television – culminating in a full-band performance of the song "5,000 Candles in the Wind" from his show's season three finale – it was also a decidedly sweet performance. Giving a theatre full of Parks and Recreation enthusiasts a soft side to the man who plays Ron Swanson is an oddity, indeed. 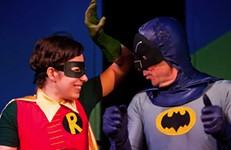