Dana Gould likes hiding the pill in the banana 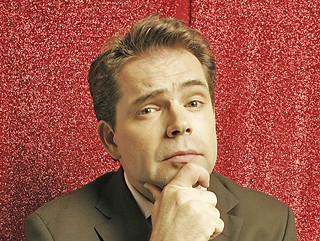 "I'm happy to be part of anything with 'oddity' in the title," comedian/writer Dana Gould declares from his home in L.A. about his upcoming appearances at the Moontower Comedy & Oddity Festival. [Disclosure: I am in the employ of the Paramount Theatre as a house manager, serve as the festival's assistant artist relations manager, and helm the festival's blog.] The 47-year-old Gould has a slight rasp in his voice these days, but his buoyantly wry POV is as brisk as ever (and evidenced by his recent sets on Conan and Kimmel). Renowned for his caustic wit, Cheshire cat grin, and seven-year stint writing and producing for The Simpsons, Gould has been performing stand-up for three decades. The Irish Catholic from "the world's most ironically named town" – Hopedale, Mass. – hit his first open mic at the tender age of 17.

"It was two weeks after high school, and I was at the now-legendary Ding Ho, a Chinese restaurant/comedy club in Cambridge. Lenny Clarke was the emcee, and it was right at the beginning of the big comedy boom in Boston," he recalls. "It was the week after Steven Wright was spotted and the week before he went on [The Tonight Show]. I was always a big stand-up fan, and I was in high school during the heyday of the original Saturday Night Live and when Steve Martin was huge. So it always seemed like if you could figure out how to do it, it was a way to go. I had very few other applicable skills, other than jazz and tap." [Laughs]

Comedians Kenny Rogerson, John Ross, and Albert Brooks heavily influenced Gould: "Kenny's material was really dark in a way that appealed to me, but he didn't deliver it in a dark, spooky way. Albert Brooks and John Ross, they're both storytellers, but I liked the way their energy was so contained. What I liked about all of those people was that on the surface they looked like normal people, but if you really listened to what they were saying, there was a lot going on there. I always liked hiding the pill in the banana, as they say."

When Gould moved west, he found another bustling scene. "San Francisco was a little more tolerant, a little groovier," he says. "So I went into this more indulgent audience with a lot of heavy artillery because I came out of Boston, and I think that's why I was able to develop so quickly there. All my stagecraft had already been set in stone since I came out of such a rough-and-tumble area. It's like being in Marine boot camp, and then you're ready for anything. Then you'd go on the road and go down to North Carolina, these places where they hated you [laughs] for dint of not being them. A lot of that Boston training really paid off."

Two years after making a base in the Bay Area, Gould moved to Los Angeles, where he witnessed the comedy-boom bust and was then instrumental in the creation of a seismic shift in stand-up. "In a way, it was inevitable, and it was sort of the natural order of things, that something that had become so prevalent would crash and burn. The reason that we started what has since become known as the alternative comedy scene was just trying to find a venue where comedy fans would want to go, which at that time was anywhere but a comedy club because comedy clubs were so overcommercialized and there were three in every town. The whole idea came in 1989 at an Elvis Costello & the Rude 5 concert at the Universal Amphi-theatre; it was the Spike tour. We were sitting with a bunch of people and [wondered], 'How do we get these people to come see us?' It was me, Janeane Garofalo, Kathy Griffin, Bob Odenkirk, Ben Stiller, and a couple of other people – it was just our social circle at that time." Along with Andy Kindler, Gould kept a foot in both factions and "could apply the lessons that we learned in the alternative venues and use them in a mainstream club." Gould adds, "Having a great act is meaningless if you don't have the tools to put it over to people that aren't predisposed to like it from the get-go."

Preeminent Simpsons writer/producer George Meyer invited Gould to come in once a week to punch up jokes, which led to him becoming a staff writer. Reflecting on his oeuvre, Gould says, "I think the first episode I wrote, called 'Homer the Moe' from season 13, was actually the funniest of the ones that I wrote. I'm very attached to 'Goo Goo Gai Pan' from season 16; it was when they went to China to adopt a baby for Selma. That was based on my wife's and my experience in China with our daughter. So, obviously it came from a very personal place and I thought the episode came across really well. A lot of the stuff that you'd laugh at was stuff that came from just the lunacy of the writers' room. I remember George Meyer in the midst of a heated argument about a joke, literally pounding the table like Khrushchev, saying, 'Look, nobody wants cargo pants in this punch line more than me!' [Laughs] That is the stuff that you remember."

Gould and his wife, Sue Naegle, president of HBO Entertainment, now have three daughters, and his happily hectic domestic life has allowed him to focus his outlook. "It didn't become so much about how I was screwing up; it became about my perception of stuff, and that's when that jelled for me. I actually think I'm a better comic now than I was then. I feel like I have more colors in my palette than I did then." 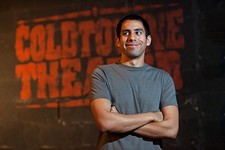