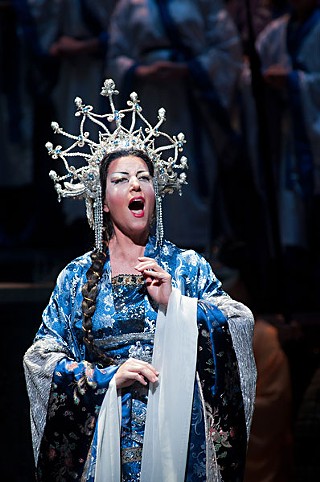 
In case you happen to find yourself short on review-reading time this week, I'll summarize the following in three words: Don't miss Turandot.

Austin Lyric Opera closes this silver anniversary season with its best staging of the year, directed with clean precision by Garnett Bruce. All stops are pulled: The orchestra, conducted with clarity and passion by Richard Buckley, offers its prime performance of the season, as does Marc David Erck's mighty chorus. The supporting cast is the strongest of this year's productions, as are R. Keith Brumley's set designs.

There's not a weak link in this Turandot's chain of performers, but Lise Lindstrom as the stone-cold titular princess – having also recently debuted in the role at the Met, La Scala, and the Deutsche Oper Berlin – reigns supreme with her soaring performance. As with Lyubov Petrova, who commanded the stage as Lucia di Lammermoor in ALO's production of Donizetti's masterwork, it's difficult to tear one's attention away from Lindstrom. The greatest challenge of donning the infamous headdress of Turandot may be in creating a sympathetic character, a difficult task indeed when one considers her resemblance to the likes of Marie Antoinette. But Lindstrom channels the pathos of Turandot with true grace, and despite the princess' very bloody hands, we are persuaded to see her motivation.

Although Frank Porretta gives a fine performance as Calaf (whose aria "Nessun Dorma" is certainly the opera's most well-known), the true second star of the evening is Elizabeth Caballero as Liu. The ease of tone with which she delivers demanding vocal passages is especially impressive, a talent matching that of her comfortable acquaintance with acting. Also deserving of special accolades are Craig Verm, Brian Joyce, and Joseph Frank (playing the trio of ministers Ping, Pang, and Pong, respectively), as well as Holton Johnson as the emperor, each of whom brings colorful detail to the production through his carefully wrought acting and vocal inflections.

Puccini's final opera is grand indeed, earning its rightful place among the card-carrying constituents of the grand opera tradition. The ALO team embraces this quality and presents a production that is not only visually arresting, but – more importantly – is also filled with talented performers and tight direction in all areas. It's an especially fitting end to a high-quality season: This year, the organization has truly given us an anniversary worthy of silver. 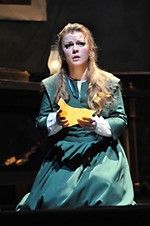